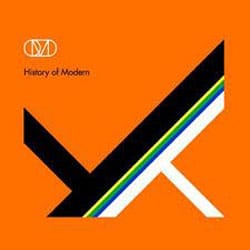 It was perhaps inevitable that Orchestral Manoeuvres In The Dark would return. Fourteen years after the release of Liberator, Andy McCluskey and Paul Humphreys are coming out of unofficial retirement – and are doing so with all guns blazing.

Whether inspired by name checks from the likes of The Killers or LCD Soundsystem, or the fact music has switched back to recognising the influence of their 1980s electronic peak, the two have got the creative juices flowing once again. History Of Modern is a brave, all or nothing title to run with though, a sign that for the band, it could be now or never.

And you know what? On this evidence it looks like being now, and that a second wind could well be in the offing. It’s not plain sailing by any means, but it almost comes as a relief to report there are many fine moments on this record, and several inspired ones. Through his work with Atomic Kitten while OMD has been lying dormant, McCluskey has not lost the knack of a good hit making tune, despite his girls doing their level best to convince us otherwise, and that talent crops up in spades here.

New Babies New Toys is a real statement of intent to get things started, proclaiming its worth with impressive gusto. By If You Want It we’re in to familiar OMD territory, its huge peroration convincing us that “if you find it, it will come, through the rain and burning sun”. It’s like they’ve never been away.

History Of Modern is split into two parts – a helpful concession to older album formats – and it works well listened to either in that way or as a complete whole. By the half time interval, however, a few cracks begin to show in the bluster, as History Of Modern Part 2 wonders “why I’m drinking more and more each day”. It’s one of several vulnerable moments on the album, with the second part turning in on itself towards the end to become more introverted, its extended coda The Right Side providing a downbeat close.

Crucially McCluskey’s voice has not changed, evidenced by the preening of Sister Mary Says, and his performance is as passionate as ever. Not even that can save Pulse, however, the album’s awkward point pitched the wrong side of sexy, so that it sounds like a rather sleazy indulgence despite a catchy refrain and bass line.

Yet let there be no doubt, this is an album that celebrates OMD’s electric romanticism as purely as ever, with occasional concessions to house music developments made in a way that flatters their own work, part of an impressive desire to keep their original aesthetic . In that respect, it represents a qualified triumph.