OMD – The Punishment Of Luxury 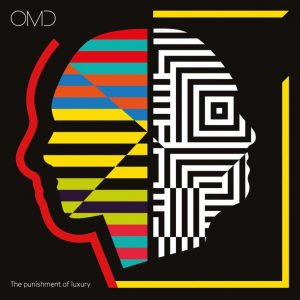 The new technology backlash starts here. On the face of it, it’s a brave move to take new media to task when your music is built on the very source of its power, but OMD have never been an outfit for doing things by halves.

Since their return in 2010 Andy McCluskey and Paul Humphreys have steadily been regaining past glories, and The Punishment Of Luxury sees them move up another notch in quality and expression. Their heart remains the synth-heavy, Kraftwerk-influenced orchestrations, but the sense of romance on top gives them a heady charm. Now there is an extra dimension, an extra frisson, for like their contemporaries this year (Erasure, Depeche Mode) OMD are bringing some raw feeling to the studio.

This is powerfully communicated in Kiss Kiss Kiss Bang Bang Bang, which finds McCluskey exorcising a personal demon or two. While the production implies a charming slower number, the singer draws the curtains as his true feelings break cover. “This time you’ve gone too far,” he states, sotto voce. “Everything makes me sick.” And then the denouement, as the backing cuts out. “Fuck you and your theory,” he declares, “nothing you do can get near me”. It is a shocking statement in the context of the song, and its impact carries through the rest of the album.

On reflection there are anticipations of this declamation elsewhere. What Have We Done is an airy waltz, using a tune that recalls Braveheart’s For The Love Of A Princess, but McCluskey reflects at its core of how “love seemed so heartless, when life turned to darkness, where only the star can be seen”. Art Eats Art is similarly destructive, though despite its high tempo carries less of an impact. Robot Man takes a different stance, the singer enjoying a private joke at his own expense.

Elsewhere the band take on the dark side of new technology. ‘Bend your body to the will of the machine’ is the tag line for the powerful La Mitrailleuse (French for ‘machine gun’), replete with firing devices. The brief track focuses in on the weapons over a completely static harmony, a sterile response to misused worldly powers. North Korea may not be explicitly mentioned, but it is uncannily evoked. Ghost Star is the natural response, blossoming into a ‘bluer’ track with a rich texture of synths for the listener to dive in to.

Once again the band’s command of a decent melody runs through The Punishment Of Luxury, showing the human element of songwriting that will never die. The title track and soaring Isotope score highly in this respect, their yearning music and lyrics pining for the days when technology was an exciting addition rather than an all-consuming aspect of everyday life.

This is the soundbite to take from the album, a brave statement levelled at a world of increasingly brief and meaningless interactions. OMD will want your interaction with their 13th album to be a lasting one – and on this evidence there is no reason why it shouldn’t be.