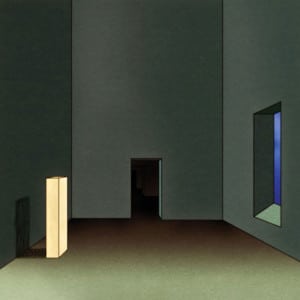 As electronic music has become ever more fractured throughout the last decade, Brooklyn based musician Daniel Lopatin, aka Oneohtrix Point Never, has emerged at the forefront of a vanguard of experimental electronic alchemists. The OPN formula has been honed over five years of sonic manipulation that mines both themes and feelings of nostalgia with a slightly warped sense of futurism. It makes for an oblique but often affecting combination of styles and sound. R Plus Seven, his first record for Warp, is a slightly different rendering of Lopatin’s textured approach, with which he creates a work that is supremely experimental while retaining all the aspects of his much-admired sound.

R Plus Seven is, in many ways, the culmination of Oneohtrix Point Never’s gradual evolution into more overtly song based musical formats. Whereas 2011’s Replica was largely built around sombre, maudlin piano pieces and dark vocal samples, R Plus Seven is Lopatin’s brightest and most immediately palatable recording to date. That he has managed to create such an immediately affecting yet adventurous work is testament to genius of sorts; this is an album that confounds and enraptures at almost every turn.

The past is still greatly referenced on the gaudy neon sparkling bursts of ’80s style sampled synth sounds that are liberally speckled around the programmed tracks like hundreds and thousands sprinkled over a lovingly created cake. At times, the album is dazzlingly bright, as on Zebra’s bold staccato keyboard bursts. It’s just one of a number of tracks that threaten to explode in beatific euphoria before instead settling into a gorgeous hazy reverie. It’s akin to the weirdest rave you could ever imagine. As with almost all Lopatin’s sounds here it is impossible to pin down.

While the sounds of the past and a filtered nostalgia is a constant presence, the record is also characterised by a questing desire to explore new sonic vistas. There is a continuous sense throughout the album that Lopatin desires to take his music to an altogether different plane. The constant morphs and mutations into new forms and shapes can be slightly overwhelming but, upon repeated listens, it is incredibly rewarding.

Opener Boring Angel is an example of R Plus Seven’s restless quality. It begins as a piercing drone enlivened by a glorious splash of gloopy synthesiser colour. The flourishes of bright sound are unabashedly overt and add much to the texture of these layered tracks. When the copious processed organs and choral voices that are repeated throughout many of the tracks are added, the sum total is possessed with a wondrous, weirded out sense of grandeur.

Elsewhere, the album meanders through all of its amorphous twists and turns without ever really losing its claim to attention. The constant fluctuating glitches, skips, hops and sampled vocal tics keep it on edge throughout. As the album progresses, Lopatin takes things deeper than he ever has before, showing a more nuanced grip on emotions and his ability to evoke real, pure meaning in his music. Still Life’s meditative choral sigh builds like a film noir thriller, while the symphonic organ, strings and choir of closing track Chrome Country provides an odd and deeply beautiful twisted lullaby to finish.

Lopatin’s work as Oneohtrix Point Never has always provoked conversation and opinion despite his remaining primarily a niche artist. The jump to Warp may provide him with more exposure. R Plus Seven is as singularly compelling as any of his previous releases, but in his desire to transcend glossy hyper pop and introspective electronica into something new and fascinating, Lopatin has delivered a masterful debut for his new label.