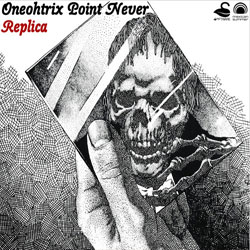 One of the most unexpected and welcome trends from last year was the relative critical and commercial success of a cluster of drone and kosmische experimenters. Whereas the work of Daniel Lopatin, aka Oneohtrix Point Never, had once been restricted to a small cognoscenti, 2010‘s Returnal edged him closer to general recognition, with even the monthly music press getting in on the accolades.

This may, at least in part, be because Lopatin has tilted his music in more accessible directions in recent years. The double disc Rifts set contained lengthy, drifting and uncompromising sound collages. By way of contrast, Returnal carried listeners on an effective journey arc from abrasive static through to melancholy calm. Replica continues Lopatin’s quest for new terrain. There is little, if anything, here as harsh and combative as some of the music compiled on Rifts. Lopatin’s evolution will be welcomed by some but others may question it as a dilution of his characteristic sound.

A number of elements here come as something of a surprise. First, there’s the prevalence of spare, haunting piano, especially on the ghostly title track. This seems to pick up where the remake of Returnal’s title track with Antony Hegarty left off. Perhaps more importantly though, there’s a new preoccupation with rhythm and space. Whereas Lopatin’s music at first seemed to reject rhythm and forward motion as a rigorous conscious choice, on Replica there are even some propulsive, quasi-danceable moments.

The clipped voice samples of Nassau create a quirky, disorientating rhythm track, whilst the pulsating heartbeat kick drum at the core of Sleep Dealer is reminiscent of The Field. Then there’s the forthright percussion of Up, probably the most elevating and groove based piece of music Lopatin has yet recorded in his Oneohtrix guise. This is not to say he has jettisoned the reveries and swathes of sound that have so far defined his music, more that he has occasionally bolstered them with anchoring features. The broader rhythmic palette on Replicas also helps create some effective contrasts. Up is particularly striking because its rhythm track, so insistent and surprising at the outset, eventually becomes overwhelmed and subsumed within Lopatin’s enveloping sound world.

What is most impressive about Replica is its sheer unpredictability. Lopatin has studiously avoided cliche here in favour of something more inventive and unstable, a suite of music that counterbalances violence with contemplation. There’s the hazy recollections of Remember, but later there is also the unsettling Child Soldier, with sounds seemingly borrowed from a Street Fighter-esque video game.

Lurking beneath the static and fuzz are thoughtful melodies and unusual dissonances. On many occasions, tracks end suddenly and uneasily just as they appear to be hitting a new stride. The opening Andro concludes almost as soon as percussion enters the fray, whilst the title track concludes abruptly on a single piano note. Part of Lopatin’s considerable appeal is his apparent refusal to settle.