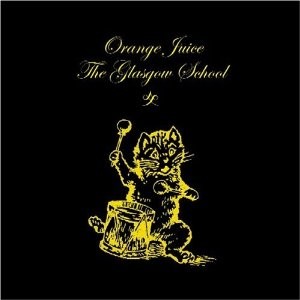 Poor old Orange Juice, always the bridesmaid and never the bride of the shambling indie-schmindie scene. Criminally overlooked in their lifetime, apart from ‘fluke’ hit ‘Rip It Up’, but now cited as a major influence by anyone from Franz Ferdinand, Interpol and The Smiths. Perhaps its time they caught the bouquet?

Collected here for the first time come the timeless early singles (and equally addictive b-sides) from their time with indie legendary label Postcard, and their first attempt at what was to become their first album. The Glasgow School is essential listening for music school kids and mature students alike.

I went to art college with dreams of being in a band. I ended up being taught by pop stars dads’ Mr Peter Collins (father of Edwyn) Will McLean (father of John in The Beta Band) and the bloke out of The Flying Lizards…

This was Orange Juice, organically fresh and free from the studio sheen that polished the rough edges off. There is no Rip It Up here.

Falling and Laughing probably sounded like Al Green fronting Talking Heads in their heads, and translates with similar musical Frankenstein-isms on a track that mutates from soul to punk and somewhere off the map. At places like cool disco-funk of Chic meets angular guitar art of Television, this is the kind of pop you’d make in your bedroom with a chemistry set, welding one to the other and not bothering to fix the joins, because, ‘Hey! They’re kind of cool too!’

On a casual listen these little gems may be dismissed for their similarity in sound and thrashy abruptness, but their uniqueness shines through as the songs progress from boundless enthusiasm and musical yearnings to more focussed delivery.

Laid out here are the blueprints for the indie scene that grew from backrooms to stadiums. From the chicken scratch guitar, sub-funk, gleefully wayward basslines you can see New Order, and camp disco intellectualisms, the first sightings of Pulp amongst others.

There’s no denying the gleeful exuberance and fun being had that kicks b-side Moscow Olympics along on its cavernous Phil Spector-ish ‘hedge of sound’ and the random shouts of ‘Moscow!’

Poor Old Soul and Blue Boy roll along on the finest white boy, blue-eyed soul with handclaps, disco/punk piano and effervescent fizz of youth gone funky. Especially Poor Old Soul’s b-side (which expands on the a-side) with its oddly thrilling cries of ‘No more rock and roll for you’.

After the singles come their first attempt at their debut album, Ostrich Churchyard, which was subsequently scrapped only to be released in 1995. The tone here is more restrained in delivery and more focussed in the depth of their range. From the cheese-country stroll of opener Louise Louise, and the sweet soul of In A Nutshell. The songs themselves usually deal with the vagaries of love in all its states, mostly unrequited, flawed or yearning, but in such a intellectualised/romantic way that they straddle the line between comedy and humour. This is in no small part to the wry, melodramatic delivery by Edwyn Collins.

Take Consolation Prize which could be straight from the pen of Morrissey with its navel-gazing honesty of ‘never being man enough for you’ seen not as self-pity, but defiant and cool. And the last track on my copy of this cd is the cheeky Peel session track Blokes on 45 which melds snippets from their catalogue into a lumpy disco track in a gloriously ham-fisted way.

If it wasn’t enough to buy this wee collection for the tunes to be, this deserves to be bought to speed frontman Edwyn Collins’ recovery from brain haemorrhage. If ever a man used his brain in pop music this is one of them. Take Orange Juice to your hearts and love them forever. Your record collection owes them.