Orchestra Baobab – Specialist In All Styles 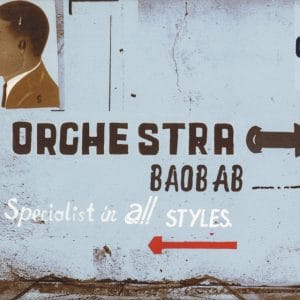 Now released on vinyl for the first time to tie in with the great Senegalese group’s 50th anniversary this year (having started as a house band for the Baobab club in Dakar in 1970), Specialist In All Styles is one of the landmark African albums. Originally released in 2002, it represented a comeback for Orchestra Baobab, emerging after a break of 17 years during which the various group members drifted apart, some working in different bands. The extraordinary guitarist Barthelemy Attisso (providing one of the defining characteristics of the group’s distinctive sound) apparently gave up music altogether and instead worked as a lawyer in Togo.

The latest repackaging of this most joyful and inspiring of recordings is bittersweet. On the one hand it celebrates the group’s international success and endurance but, on the other, it arrives only a short time after the sad passing of founding member and singer Balla Sidibe. Recorded in London in just 10 days with World Circuit’s Nick Gold (who worked hard to make his personal desire to see the band reform a reality) and Youssou N’Dour, Specialist In All Styles captures a profoundly natural and empathetic atmosphere between the musicians.

Notable for its effortless blend of Cuban melodies and rhythms with Senegalese musical styles, the music on Specialist In All Styles succeeds in being at once relaxed and graceful and also celebratory and rousing. The opening Bul Ma Min, with its repeated call and response vocals, gently propulsive rhythms (almost ska-like, a stylistic trait repeated on the infectious Ndongoy Daara) and memorable guitar lines is a prime example of this deft and agile quality.

The group’s skill with expression and melody is fully realised on the stunning Dee Moo Woor. Exploring questioning nights following the death of singer Ndiouga Dion’s father, the song has a mournful and elegiac quality, enhanced by Attisso’s use of the wah pedal and a moving and compelling vocal performance from Dieng. On Verra Ça focuses more on the rhythmic foundations of the ensemble, with dramatic punctuations and percussion features. Hommage À Tonton Ferrer includes contributions from five singers, including guests N’Dour and Ibrahim Ferrer of the Buena Vista Social Club collective. It also highlights the fluent and absorbing saxophone playing of Issa Cissokho. The closing track Gnawoe provides a joyful and uplifting summation of the band’s signature sound and approach.

What remains most impressive and enduring about Specialist In All Styles is the ease with which the musicians connect and create a performance atmosphere in the studio. This never sounded like a band that had been away for many years, but rather one that had developed a working synergy over time that could be effectively revived. It is one of the key albums of contemporary West African music.