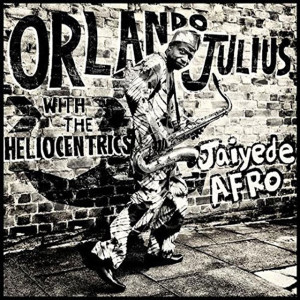 London based band The Heliocentrics, lead by drummer Malcolm Catto, are building an impressive career on collaborations with major figures in African music. They contributed massively to the revival of interest in Ethiopian music through their work with Mulatu Astatke. Now they are playing a supportive role on what is amazingly the first internationally released recording from Nigerian vocalist and saxophonist Orlando Julius. With the wealth of attention now justly given to Fela Kuti as a pioneer of Nigerian music, it would be great if some of that limelight reached Julius, himself a contemporary of and influence on Fela and a representative of Nigerian music abroad during his time in the USA during the 1970s.

Of course, as with their work with Astatke, The Heliocentrics are much more than simply a backing band here. They inhabit the spirit of Julius’ robust, memorable and celebratory music with aplomb, constructing some intricate, agile and web-like grooves. Often, these find Catto restraining expressive and improvisatory tendencies in favour of a lighter, more supportive approach to playing, his kit blending effortlessly with a range of additional percussion sounds and interacting with guitar parts and bass lines. In addition, the band also push the sound in other exciting directions as well. So whilst the song selection finds Julius dipping back into his rich, largely unrecorded history, the sound of the album is adventurous, with echo-laden effects and other sounds borrowed from psychedeila. This never happens at the expense of the relentlessly steady grooves.

The opening Buje Buje is a case in point – a steadfast eight minutes of unwavering groove, adorned with some enthralling psychedelic effects and atmospheric sounds. According to Julius the song, through the medium of a folk tale about a tortoise playing tricks on unsuspecting women, ‘teaches us not to copy something that is bad, fake or deceptive’. It certainly makes for a mesmeric experience, and Julius sounds buoyant and wise.

The effervescent Love Thy Neighbour hints at some of the connections between West African music and western pop, its central riff strongly recalling Odyssey’s Going Back To My Roots (if anything a case of Julius plagiarising himself as he in fact co-wrote that hit with Lamont Dozier). Julius improvises above it in delightfully concise phrases and the punctuations provided by the horn part enhance the mood of celebration. James Brown gets namechecked on Aseni, and it’s not hard to see the symbiotic relationship between this kind of stretched out groove music and his brand of brilliantly repetitive funk.

The approach to arrangement shifts effectively between shorter, punchy and highly memorable songs such as Omo Oba Blues to the kind of protracted, stretched jams that will be familiar to any admirer of Fela Kuti’s work. There is of course a rigour that comes with the passion and enthusiasm here, and a real discipline to maintain each part in the groove for as long as is deemed necessary. The superb Be Counted is a great example of how well The Heliocentrics inhabit this space.

Julius’ saxophone solos veer from bright, infectious and melodic lines to purposefully jarring, unhinged trills, often within the space of just a few bars. This is music that deftly incorporates both tradition and innovation, light and shade, respect and anger. There are echoes of all sorts of ghosts (the title track’s solo seems as if it might conclude with a reference to Mongo Santamaria’s composition Afro Blue, famously recorded by John Coltrane) and this excellent record stands as a testament to the fascinating links and interactions between musical cultures.

Orlando Julius and The Heliocentrics MP3s or CDs

Orlando Julius and The Heliocentrics on Spotify