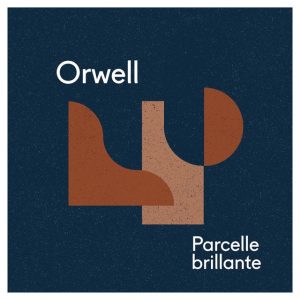 On the surface, chamber pop ensemble Orwell present something of a conundrum in that they hail from north east France but are named after one of England’s most noted authors. You won’t find many references to dystopian fiction or political allegories within their music, but there are some broader literary connections to latest album Parcelle Brillante which help place and contextualise it.

Multi-instrumentalist and songwriter Jérôme Didelot is the creative force behind Orwell and he has followed a settled, yet developed path since first releasing music back in 2000. Their fifth album Parcelle Brillante was inspired in part by the writing of American writer Theodore Sturgeon (the name of the album is borrowed from one of his short stories) and they count author Jonathan Coe among their fans. It’s an album that revels in simple musical joys, whether a beautifully defined melody, a frictionless arrangement full of arcs and troughs or a succinctly delivered set of lyrics.

The slowly unfurling, guitar-led instrumental Dérivation ushers the album in and the elegantly assembled chamber pop of Jamais Assez contains shades of Stereolab, in no small part due to the vocals of Armelle Pioline. As an opening pair they show how Parcelle Brillante offers francophone pop that looks further afield than most. Guitar and piano are to be found within the songs but it is the marimba, vibraphone, flute and cello that help truly give the album its identity.

Tracks like Porquoi Savoir? and Rien Ne Pourra Me Rendre Sage feel similar in places to The Devil Laughs, the album released this year by Stuart Moxham & Louis Philippe, both homely and easy to listen to (the similarity is perhaps not a surprise given how Didelot has played with Philippe in the past). Les Mains De Bianca showcases an appreciation of 1960s baroque pop like The Left Banke while Les Ondes pursues a nice line in melodic shifts and likeable Gallic charm. In the past Didelot has covered songs by The Divine Comedy and tracks like these provide a clear, traceable link. Later, the spoken word interlude in Lone reinforces the broader literary dimension of the album (the passage comes from Theodore Sturgeon’s novel More Than Human, here read by Didelot’s son).

The title track is better still, having a beautiful weightlessness to it as it evaporates skywards. Like other tracks on the album, it also feels imbued with the spirit of The High Llamas. It’s left to the heartfelt, reflective Dors Encore to deliver the final chapter of a highly accomplished release. It proves that the Orwell name very much carries significance in a musical capacity as well as its more established literary counterpart.