Ought – Room In The World 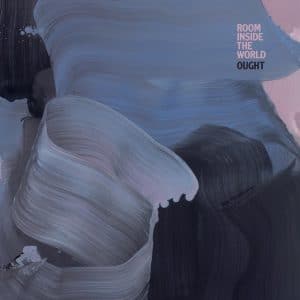 Up until now, Ought have seemed like Montreal’s best kept secret. Those who heard their spiky indie-rock, who heard Tim Darcy’s idiosyncratic, Mark E Smith meets Morrissey‘s agitated vocals, quickly fell in love. Yet up until now, there were not enough of those fans, ensuring that the Canadian quartet remained very firmly in the bracket marked ‘cult critical acclaim’.

There’s a feeling though that that’s all set to change with Room Inside The World, Ought’s third record. There’s been a change of record label (to Merge, US home of The Mountain Goats and Destroyer), and there’s a change of musical direction as well. It’s still as exhilarating and deftly executed as you’d expect from Darcy and company, but they’re exploring new avenues this time around. Yet, as with the band’s previous work, it grabs you by the scruff of the neck from the beginning and almost demands that you keep listening.

Opening track Into The Sea introduces a new, almost widescreen, sound into their repertoire, but there’s enough weirdness to keep it weighed down – the odd shifting time signature, Darcy almost growling “I can’t be here in my wagon”, and a relentless dark edge that recalls early Interpol. It’s followed by the excellent Disgraced In America, all sunny guitar chords and lyrics such as “birds fly round while the dividends pay… crapping out tokens and live in a haze”. Then, in the middle of the song, an almost chaotic horn section breaks out – it’s a thrilling one-two to open an album.

Elsewhere, it’s clear that’s Ought’s ambition has broadened considerably since the release of Sun’s Coming Down three years ago. Brief Shield is unlike anything they’ve done before, a quiet, resigned mope that has an odd similarity to the old Prefab Sprout song Couldn’t Bear To Be Special, while lead single These 3 Things sees Darcy muttering lines like “why must my dirty skin be hot when you come near me?” while sounding ever more like Morrissey.

The most startling track on Room Inside The World though is undoubtedly Desire – which, over the course of its five and a half minutes, sees Darcy almost have a vocal breakdown – yelping and crooning almost in the space of a single line – before a 70-strong choir and a blaring horn section kick in. It’s the sort of song that personifies this new sound from Ought: bursting with ideas and an energy that just has to be let out.

While it’s not a wilfully commercial album, there are songs that would fit quite nicely onto an indie disco night or a 6music playlist. Disaffection nods to early The Cure with an driving bassline in a song that always feels like it’s on the edge of falling apart, as well as lyrics like “these city streets keep me holed up in my mind, here’s some liberation, you can order it online”. It’s unclear what these songs are all about, but the weirdly poetic beauty of Darcy’s lyrics means that you can’t stop yourself from trying to unravel it all.

By the time the eerily atmospheric, almost menacing closer of Alice has rolled around, you’ll want to go straight back to the beginning of the album and experience it all again. This should be the work that propels Ought to superstardom, but there’s a nagging feeling that they may still be a bit too obtuse for commercial success. The rest of us can just enjoy one of the early musical highlights of 2018.

Ought MP3s or CDs

More on Ought
Ought @ Garage, London
Ought – Room In The World
Ought – Sun Coming Down