Ought – Sun Coming Down 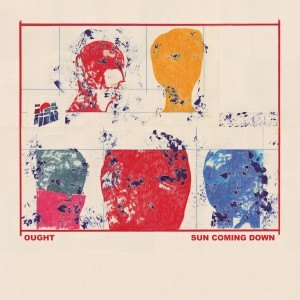 Montreal quartet Ought had one of 2014’s underground sleeper successes with their strikingly idiosyncratic debut album More Than Any Other Day. While the music was frenetic, wired post-punk indie rock there was always a spark of accessible melody present to suggest that they could prosper in the lineage of other dynamic North American indie rock bands like R.E.M. and Sonic Youth. Their second album Sun Coming Down succeeds in developing their intriguing sound and approach while allowing a welcome splash of light and colour to creep in.

Ought are a band who have a perfect grasp on who they are and where they’re going. Everything they do is thoughtful and impactful. Consider the striking cover image of dollops of bright colour, a stark contrast to the monochrome grey of the debut record. Also, a sign of their supreme confidence is their steadfast adherence to only having eight songs on their record, an old indie rock trick from the ’70s and ’80s that signifies there is not an inch of fat, wasted breath or thrown away guitar line on the record. Everything happens for a reason.

Musically, Sun Coming Down is just as visceral, hyperactive and invigorating as the debut. Opener Men For Miles is an impossibly thrilling propulsive race to the finish. It suggests a band on a mission; their music might not change the world but they are certainly going to strain every sinew trying. “Excuse me, would you say there’s a chance of bringing this whole fucker down?” cries singer and guitarist Tim Darcy in his wonderfully mannered, affected voice.

Darcy is the odd character that is at the forefront of Ought’s music. He’s like a modern hybrid of Mark E Smith and David Byrne – a man at once raging against all societies modern ills while also beautifully at peace with his place in the world. His internal conflicts and stream of consciousness dialogue provides a constantly compelling quality to Ought’s music. Darcy has a wonderful gift for providing insightful, relatable lyrics. “I am talking out of my ass because my heart is not open,” he sings on the title track. It’s not a line that suggests despair though; it’s more a line of defiance. Darcy is yet another in a long line of rebellious counter cultural indie rock heroes.

Sun Coming Down is a record that proceeds in similar style and sound to the debut album, however, it is illuminated to the next level by a stunning centrepiece. Beautiful Blue Sky is Ought’s defining moment. A single musical epiphany that bears comparison with the high points of almost any indie rock band. Slowly developing from sparse bass and guitar it’s a musical journey through the futility of modernity and mundanity. Darcy becomes increasingly animated and agitated as he delivers almost comically basic lines and questions. His cries of “How’s the family? How’s the family? How’s the church? How’s the job? Fancy seeing you here? Beautiful weather today?” become increasingly agitated, frantic and unhinged. By the song’s climax though he sounds ecstatic and celebratory: “I’m no longer afraid to die, cause that is all I have left, Yes! Yes!”

With Sun Coming Down Ought have affirmed their place as a band to believe in, one to cherish, who understand that indie rock can still be transcendent and moving. It’s a very special second album that will resonate deeply both with early adopters and the wider audience that Ought will surely capture.

Ought MP3s or CDs

More on Ought
Ought @ Garage, London
Ought – Room In The World
Ought – Sun Coming Down