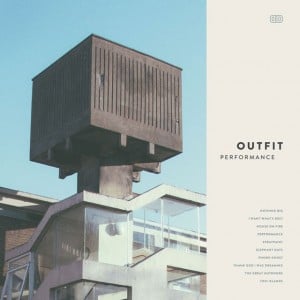 Outfit’s releases up to now have been a little confusing. It’s been difficult to tell if they were an art-rock group or more inclined towards electronica; certainly, the excellent early single Everything All The Time leaned convincingly towards the former. Anyone hoping for more of the same will be disappointed, as Performance owes far more to Mount Kimbie than it does Roxy Music, and anyone hoping for a record that delivered consistently on the promise of Everything All The Time will be disappointed too.

Performance ends up feeling like a compromise between genres and influences rather than an inspired alchemy. But the best moments point towards an interesting future for the band, and it would be foolish to write them off on the basis of this set.

Performance’s main problem is not the songs but the band playing them, and their surprising lack of a sonic identity. Everything All The Time, from the song to the performance to the video, was idiosyncratic and intriguing, wearing its influences lightly. By contrast, much of Performance sounds completely impersonal. The mixture of the Mount Kimbie-ish electronica and more conventional tropes from British indie of various types is innovative and largely successful, but surprisingly unexciting for all that. Outfit sound as if they hope a mixture of existing forms will constitute a contribution. It’s a reason to be interested in them, but it doesn’t quite turn out to be much more.

This is especially problematic as the songs on Performance are on the whole of the kind – groove driven, reliant on rhythm rather than melody – that require a convincing performance on record, and that’s what’s missing. The album sounds as if it was built almost entirely in the studio, which probably isn’t the case, but it matters. It wouldn’t be a problem if the album followed through convincingly on its forays into electronica, but it doesn’t – Outfit’s music doesn’t benefit from sounding as if it was put together in a bedroom. The bass lines – reminiscent of the funk-influenced playing of Franz Ferdinand’s Bob Hardy – lack force and are left too low in the mix, swimming around under various synthesizers, to do the work required of them. It’s rather frustrating, as all of the songs could have worked better had more restrained, sparse production been chosen.

That said, there are high points on the album where it all begins to work very well. Bizarrely, they all come at the end of the record, beginning with Phone Ghost. Interesting melodies balance the songs and take the pressure off the rhythm section. And the latter third of the album is the first time that it feels as if there are proper choruses (Performance never travelling far enough into the boundaries of electronica to justify not having any). There’s an odd decision made on Phone Ghost to expose a pretentious section of the lyric that makes no sense whatsoever (“A ghost in the machine that knows everywhere I’ve been/ What happened to the person that I knew?”), but the sudden rise in quality more than makes up for it.

Likewise, Thank God I Was Dreaming satisfies in terms of melody, occupying the same sweetly melancholic space as Hot Chip, and there’s a strong vocal resemblance. The Great Outdoors and Two Islands make sure that listening to the album doesn’t feel like a waste of time. There’s an EP’s worth of solid material here to sink your teeth into, if you haven’t lost patience after the first few tracks. Performance doesn’t demand your attention until this final stretch, and it’s not hard to imagine speculative listeners moving onto something else before arriving here. Still, better late than never, and Performance does eventually deliver.

Outfit are clearly a decent band with good ideas who deserve a future, but they’ll need a much stronger record than this if they’re to stick around. Most importantly, they need to inject more of themselves into their music. The end of Performance suggests strongly that they can and will. As such, their next attempt is worth waiting for.