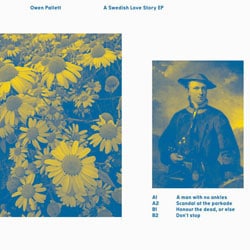 Following so closely on the heels of his January full-length, Heartland, Owen Pallett’s A Swedish Love Story risks feeling tacked-on or underdeveloped. Certainly, one has to wonder about its brevity; it runs an economical four songs in just over 16 minutes. But over the course of its runtime, A Swedish Love Story is something all-encompassing, Pallett’s violin and gentle tenor voice pulling the listener into the sweep.

Since dropping his Final Fantasy stage name, Pallett has had little trouble establishing himself under his own name. Heartland earned him his second Polaris Prize, and he’s spent time in 2010 opening for The National and Dirty Projectors, as well as once-collaborators, Arcade Fire.

Musically, Pallett’s new EP is a showpiece for his technical skill as a classically trained violinist. But, somehow it manages to not come off as overly highbrow. Besides being able to turn out emotive, multilayered violin runs, Pallett also has a distinct pop sensibility, allowing his melodic voice to come off as kind natured and slightly dejected. Vocally, he’s not too far removed from Jens Lekman.

A Man With No Ankles opens the album with electronic drums and atmospheric strings. “Somewhere between the window and my doorstep, I remembered what it was to play,” Pallett sings, before the violin-piano interplay spins things into near indie-dance territory. “The future is so constant in a world of free will,” Pallett continues, and goes on to contemplate themes of predestination with sing-along ease.

A Scandal At The Parkade opens with frenetic violin scratching, and sets a fevered pace for a narrative about equations and logic. Honour The Dead Or Else stands out as the EP’s centrepiece, plodding gently through an expansive soundscape of soaring strings and reverb-soaked falsetto. Don’t Stop finds Pallett lyrically channelling Morrissey over a gently driving rhythm. “How long before they take the money away?” Pallett sings. And: “Don’t stop on my account.”

A Swedish Love Story is, from one end to the other, a completely enjoyable slice of violin-driven pop perfection. But its brevity means that the listener is slapped in the face with reality all too quickly, like being awoken from a dream just as you were getting to the really good part. If Pallett puts this much care into a four-song EP – and one that can really be seen as a sort of epilogue to Heartland – his legitimate follow-up is certainly something to anticipate. And, at this rate, it should hopefully not be too terribly long before Pallett’s next musical offering graces our ears.