by Andy Baber
published: 21 May 2014 in Album Reviews
Tweet 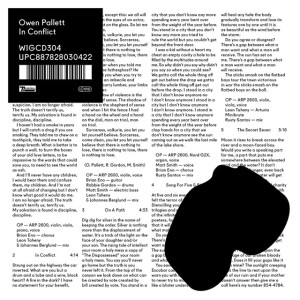 Arcade Fire, Fucked Up, The Last Shadow Puppets and The National are just some of the many acts that have enlisted the help of Owen Pallett in recent years. In fact, the Canadian’s ability as a composer is such that he has become the go-to man for string arrangements, with his reputation continuously growing since releasing his debut solo album, Has A Good Home, under the moniker of Final Fantasy in 2005.

His second album as Final Fantasy, 2006’s He Poos Clouds, fared even better than his first and won the Polaris Music Prize. Pallett was nominated again for the award for his third album Heartland – his first under his own name – which was released in 2010 to widespread critical acclaim. While there was a four year gap between the two records, Pallett kept himself busy playing strings on a number of albums, including Arcade Fire’s brilliant The Suburbs.

As with Heartland, Pallett’s new effort In Conflict comes four years after his last – and after working with another extensive list of artists, including Taylor Swift and Franz Ferdinand. It also arrives with his reputation arguably at its highest standing, after the original score he and Will Butler composed for Her was nominated for an Academy Award. With such recognition usually comes pressure, but you certainly wouldn’t know that was the case when listening to Pallett’s fourth solo album.

In Conflict is his most personal and heartfelt album to date, moving away from the fantasy and dystopian commentary that littered his earlier material. “I’ll never have any children,” he sings directly on opener I Am Not Afraid, as beautifully dramatic strings dance around his melancholic vocals. It’s a wonderful and strikingly poignant start to the record, one that really gives an indication of Pallett’s mindset and what he is attempting to achieve.

Following the grandeur of the opener is the title track, which is far more purposeful as its various different elements work together to produce a fascinating concoction. “I have no statement for your benefit young man, except this, we all live again,” Pallett asserts, as wondering synths provide the base for strained strings and a rumbling beat. The song almost has a rock sensibility about it, something assisted by Pallett’s decision to record with a band this time around.

It is not the only moment where the 34-year-old lets loose, either, with single The Riverbed going one step further and delivering almost four minutes of frenzied rock and roll. The violently plucked violin combines mesmerisingly with a rushing guitar hook as Pallett delivers his most authoritative vocal. Yet, while the moments of raw, energetic power are undoubtedly joyous, it is still Pallett’s orchestral compositions that win out in the end.

On A Path is another glorious example of his meticulous arrangement, with huge sweeping strings quickly descending into a tense, delicate beat, while The Secret Seven features rich layers of heavenly melodies, which play off against each other as the song reaches its satisfying conclusion. There are also a few left-field punches delivered by Pallett, with tracks such as Chorale and closer Soldier’s Rock using dissonant synths to convey the anger and stifled emotion embedded throughout the record.

Ultimately, In Conflict demonstrates once again what a fantastic talent Pallett is – and why so many artists have him on speed dial on their phone. The record is a captivating and challenging insight into the mindset of an intelligent artist who is pushing himself further than ever before, taking his music in new and fascinating directions. Whether he is assisting others or going it alone, it seems that Owen Pallett can do no wrong, and long may it continue.