by John Murphy
published: 25 May 2020 in Album Reviews
Tweet 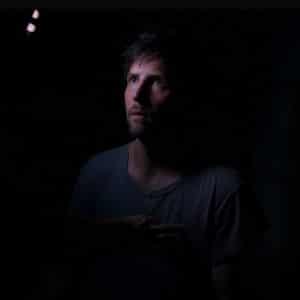 As we’re all finding out, there isn’t much to look forward to in The Age of Lockdown. The days merge into one, and a once-filled diary detailing all manner of social appointments is now blank. As some bloke called Steven once said, “Every day is like Sunday”, and historians have recorded that as the last sensible thing he ever uttered.

So, you grab the little nuggets of gold while you can in 2020. And news of a surprise new Owen Pallett album certainly qualifies as a nugget of gold. The Canadian musician suddenly announced he was releasing a new album the next day – and so, with literally no hype, no press support, no period of anticipation, we have Island, his fifth album.

Island is likely to excite some long-term Pallett disciples even more so than usual, for it is, in effect, the narrative sequel to 2010’s Heartland. That album was probably his creative peak to date, and as well as containing some of his best songs, also played with ideas about identity, with all 12 songs described as monologues from a farmer called Lewis in a world entitled Spectrum, who addressed his ‘creator’ – who just happened to be named Owen.

Lewis is brought back for Island, and anyone who fell under the spell of his previous adventures will be similarly enchanted here. Despite being released under lockdown, Pallett has actually been working on Island for over three years, and his arrangements on the record are as beguiling as ever.

The hour long running time is divided into four sections, each separated by an instrumental interlude seemingly named in the manner of an Elon Musk offspring. The actual songs aren’t maybe as ornate as might be expected – Pallett’s trademark violin is still present but no longer the focal point. Instead, many of the songs are based about some finger-picked acoustics, reminiscent of Sufjan Stevens‘ Seven Swans at times.

The entire album is rather a slow-burn, but the opening tracks unfurl beautifully. There’s a deep sense of sadness draped over Transformer, with Pallett mournfully intoning lines like “When I wish I was never born, my mother tells me I wasn’t born so much as excreted”. There’s a woozy quality to Paragon Of Order, which announces the return of Lewis with the cry “Godkiller’s alive!”.

What’s most surprising is Island’s sense of simplicity – the lovely Polar Vortex, at the halfway point of the record, is a simple three-minute acoustic lament, and there’s an almost pastoral feel to ‘part 2’ of the record, leaning on flutes, piano and delicate string arrangements. It’s only when ‘part 3’ gets underway that the songs become more ‘epic’ and stirring. Lewis Gets Fucked Into Space lives up to its title with an extraordinarily ornate and intricate arrangement that bleeds into the final instrumental coda of —> (iv). It’s this last instrumental flourish that provides the album’s most emotional point, the brass and strings combining to provide the sort of stirring moments that Pallett’s work with Arcade Fire used to hit so regularly.

Island isn’t an album that provides any easy hits – it’s more of a record to luxuriate in and discover its charms gradually. Lockdown conditions mean that it’s easier than ever to immerse yourself in this grandiose music, and those that do will find much to lose themselves in.