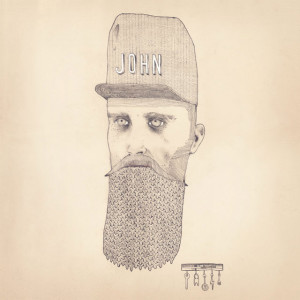 Owl John is the pseudonymous debut solo album from Frightened Rabbit’s front man Scott Hutchison. Or is it? Sing The Greys may have been released as the band’s first album in 2006, but it originated very much as Scott’s solo project, with his brother Grant later joining him on drums. And although Scott has always been the principal driving force behind the Scottish indie band, writing all the songs on their first three albums, as with last year’s album Pedestrian Verse, on Owl John he shares the songwriting credits for the music even if the lyrics are still exclusively his.

Perhaps ‘side project’ is a better description for this collaborative exercise, with Hutchison as the main man. And though two other ‘Frabbits’ – guitarist/keyboardist/bassist Andy Monaghan (who also produced) and touring guitarist Simon Liddell – are also involved (plus drummer Peter Kelly), Owl John definitely has a distinctive feel from the Frightened Rabbit material. It seems that after Pedestrian Verse (the band’s first album for major label Atlantic, and their most polished and commercially successful to date) Hutchison felt the need to make music in a different way – and Owl John is the refreshing result.

The music was written in just a couple of brainstorming weeks on the Isle of Mull, rather than developed out of the studio previously, before Hutchison moved to Los Angeles where he wrote the words and recorded the vocals. Yes, inevitably, at times the album is reminiscent of Frightened Rabbit, but it doesn’t have the same upbeat vibe or so many catchy choruses. In fact, Owl John is much more experimental, introspective and disturbing, as if delving into darker emotional territory.

The 10 tracks are set out in the same order as they were created. Opener Cold Creeps has a long instrumental intro, awash with fuzzy synths, driven by crashing drums, and overlaid by distorted vocal fragments, before Hutchison’s high-pitched singing voice joins in plaintively. The brooding atmosphere becomes strangely euphoric in Two, as a couple await the end of the world, backed by Gaelic spoken words.

The excellent single Hate Music, full of restless vigour, conveys Hutchison’s disenchantment with the constant pressure of writing music within the confines of a hard-working band: “Words can’t save my neck / The axe has been written.” Songs About Roses may have a more sorrowful than angry tone but its condemnation of copy-cat blandness in the music business is loud and clear: “We don’t need your terrible blues / Please sing me something new.”

Los Angeles, Be Kind reflects Hutchison’s uncertainties and anxieties on going to live in the alien culture of LA, while the hauntingly beautiful guitar line of Ten Tons Of Silence accompanies feelings of isolation and insecurity: “You won’t believe how quickly peace turns into bloody violence.” In contrast, the joyous A Good Reason To Grow Old is a much more benign vision of the future, growing old with the one you love.

After this rare ray of light, the gloomy mood is back in Red Hand, as the singer’s doubts are expressed in “Darling, show your hand / Are you gripping some joker behind that back?”, enlivened by a throbbing beat and some outstanding guitar licks. Don’t Take Off The Gloves reveals the ugly effects of alcohol, and the final track Stupid Boy returns to the theme of transatlantic culture shock, as the singer bemoans himself to be “Forever witless, never fully grown”.

Hutchison may seem down on himself on this record, but the music is full of creative energy. It has the feeling of releasing long-held frustrations and tensions, while exploring an alternative musical space with more artistic freedom. Owl John is certainly not the end of Frightened Rabbit – the band is already preparing for their next project – but it could be a new beginning.