by Sam Shepherd
published: 5 May 2017 in Album Reviews
Tweet 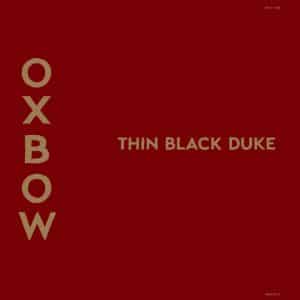 It’s been 10 years since the last Oxbow album, but it’s not as if the band has been doing nothing in that time. The ideas for this album have been kicking around for a while now. Niko Wenner’s precise approach to songwriting with its roots in classical composition and jazz has taken time, whilst Eugene Robinson’s lyrics in particular date back over a decade. The old adage “all good things come to those who wait” is entirely appropriate here however and Thin Black Duke might just be Oxbow’s most assured and impressive work to date.

Apparently drummer Greg Davis had a mantra regarding his band’s work, “whatever we do, it will be an Oxbow record of Oxbow music, meaning a lot of people probably won’t like it”. But such is the impressive scope, sound, and construction of this album, it’d take someone with genuine cloth ears and malfunctioning cloth ears at that, to find something to dislike about Thin Black Duke.

There’s quite a lot to dislike about the actual character of The Duke, the malevolent presence that hangs over these songs. Introduced on the opening track Cold & Well-Lit Place, he’s a brown shirted raconteur who seems keen to share a drink and a bit of cheese, whilst alluding to murder and stating “they say the best things in life are free, everything around here comes with a fee”. With a delivery from Eugene Robinson that veers wildly in tone, this line suggests that even by continuing to listen to The Duke spin his yarns, you’re invested in something truly troubling.

Part of Oxbow’s charm lies in Robinson’s lyrical and vocal dexterity, and as an opening gambit Cold & Well Lit Place covers a lot of ground. Inhabiting the character with the verve with which David Bowie inhabited his Thin White Duke, Robinson opens up the many facets of his vocal range and, in so doing, the multiple personalities of the Duke. He’s a rambling drunk, a timid church mouse, an unhinged angel of death, and a phenomenal raconteur. All of this would be for nothing was it not for the compositional skills of Wenner. In just one song, he combines jazz, blues, rock, classical and easy listening to create a masterful backdrop for Robinson to inhabit. There are no genres in Oxbow’s world, only what works, and this really does work. The orchestral sections in particular are sublime, adding a dramatic cinematic quality to proceedings whilst simultaneously doffing a cap at Sgt Pepper (and in particular the cacophonous climax to A Day In The Life).

Certainly there’s an element of discordance here – it wouldn’t be Oxbow without a liberal application of noise and unpleasantness – but there’s elegance too, be it in the carefully woven narrative created by Robinson, or Wenner’s motifs and sonic control. Ecco Homo in particular has a deftness of touch in its orchestral sections that you would not expect from a band whose vocalist is an amateur MMA fighter. That kind of controlled aggression can be found in A Gentleman’s Gentleman, where Robinson elaborates further on The Duke. He has a cordite moustache, a bull like neck, muscled fingers, and his hands do the talking. If you were to paint a picture of The Duke, he’d look like a version of Robinson himself.

As the album’s narrative continues, notions of love, need, subservience and power establish themselves. They’re easy to miss as Robinson’s habit of stretching his lines out beyond their breaking point can muddy meaning considerably. Add to this the desire to focus on Oxbow’s musical prowess (the straight-ish rock charge of Host, or the dainty Prog-Waltz of The Upper are both captivating. Prog-Waltz. You heard it here first) and sometimes the themes get lost. The pleasure of course is in the digging and there’s plenty to get lost in here.

As the album comes to a close, things start to unravel dramatically. On the chaotic Other People, The Duke starts to take advantage of the control he now exerts over his audience. It’s a position he’s worked his way to over the course of the album and now he’s got them where he wants them, he’s wielding an axe handle. The cold, well-lit place in which he’s been holding court takes suddenly takes on a truly icy chill, and it all comes to a head with The Finished Line. Robinson bearing his teeth, snarling his way to the album’s conclusion, detailing The Duke finishing off his audience and enjoying a job well done.

It’s a terrifying last few minutes, but when it’s all over, the temptation to be in the company of the Thin Black Duke is overwhelming, which perhaps is understandable given the album’s themes of subservience, loyalty and the misguided notion of love. However, loving this album (rather than The Duke himself) is entirely understandable. Thin Black Duke should be regarded as a genuinely innovative and exciting piece of art.