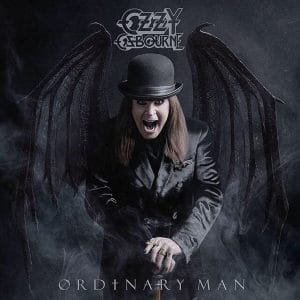 Ozzy Osbourne has nothing to prove at this stage of his career. He’s occupied just about every role imaginable in the modern entertainment world. He’s the heavy metal progenitor, a hair metal joker, the archetypal bumbling reality show patriarch, he’s a wizened sage of doom metal.

And yet he continues to enthral an audience of fans born after his peak had long been and gone, and he still remains a marquee name – so much so that his feature on a recent Post Malone single (which appears here on Ordinary Man as a bonus track) made worldwide entertainment news. The release of this new album coincides, sadly, with Ozzy’s admission that he is too ill to complete the dates of his already-delayed No More Tours 2, a years-long Spinal Tap-esque retirement tour, which comes nearly 40 years after he first ‘retired’.

Ordinary Man, an album nobody expected, or even asked for, is replete with solid, chunky, over-produced pop-metal in the vein of the solo albums he’s released since the early 2000s, and especially the most recent Alice Cooper efforts. Produced by pop producer Andrew Watt, recommended to Ozzy by no less than Post Malone, who also contributes lead guitar to many tracks, Ordinary Man has a decidedly divisive modern sheen that will either entice or completely alienate long-time fans. It also features the most egregious ‘vocal assistance’ of any album in Ozzy’s catalogue, which is to say that the auto-tune is relentless and completely brutal. It’s everywhere. Where Rick Rubin ensured that the auto-tune on Black Sabbath‘s final album, 13, was used tastefully and fittingly, Watt uses it liberally and without mercy. But it’s a minor gripe – Ozzy fans have been aware of his use of auto-tune since at least the early 2000s.

The album, all things considered, is a success. Under The Graveyard, the first track released from the set, used Black Sabbath dynamics and an ominous sense of foreboding to try and recapture the ‘feel’ of Ozzy’s best work. While not as sincere as the tracks on 13, it retained a sense of classic Ozzy, and ensured that fans would get behind the record. But what Ozzy has done, whether intentionally or otherwise, is produce a minor miracle of an album. This is his most experimental, star-studded solo work for at least 25 years. For real Ozzy fans, here’s the facts – this is a better record than any since, maybe, Ozzmosis. You just have to give it time.

The appearance of special guests is not something new to Ozzy solo albums, but this album is full of them. Out is his longtime collaborator, and greatest co-writer since Randy Rhoads, Zakk Wylde. Out is his most recent guitarist, Gus G. Out are Blasko and Tommy Clufetos, his long-term rhythm section (the latter of which, Tommy Clufetos, drummed on the final Sabbath tour). These metal stalwarts have been replaced with, oddly, Chad Smith on drums, Duff McKagan on bass, and producer Watt and Slash on lead guitar.

Straight To Hell, the opener, is solid, riff-heavy and dense, with a laughably hilarious threat that Ozzy will make you scream. Then you get the harmonica-aided simplicity of Eat Me, which is all about, you know, eating him. So far, so Ozzy. Elsewhere, there’s the genuinely thrilling It’s A Raid, which pairs hard rock with one of Ozzy’s funniest drug-induced paranoiac tales about how he once took all of his cocaine because he feared arrest. And you can imagine that all of his cocaine would be lethal for any normal humans. The title track, a duet with one of rock’s other lifers, Elton John, offers a sweeping, ’60s-tinged weeper about looking back at a legacy and finding yourself with more questions than answers.

Overall, this is just another Ozzy Osbourne solo album, for better and worse. It succeeds in its rawness, its slapdash cobbling together of predictable riffs and lunatic poetry. It falls down on its inability to break free from the template Ozzy laid down with Randy Rhoads a lifetime ago. And so it doesn’t matter if this is his final album – it’s no Blackstar or You Want It Darker – because Ozzy’s finest work has never been made under his own banner. Listen to it if you like, love it if you can, but don’t forget that for 10 glorious years from 1969-1979, Ozzy Osbourne proved he was anything but an ordinary man. Not many folks can say that.