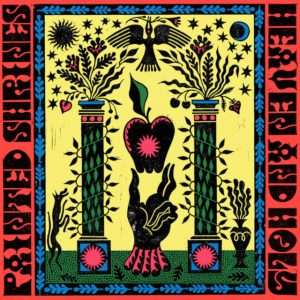 Over the last decade and a half, the New York state based Woodsist label, run by the gifted multi instrumentalist Jeremy Earl has been responsible for a chain of superlative releases from his very own Woods, as well as groups such as Moon Duo, Hand Habits, Real Estate, The Woolen Men, Kevin Morby and Skygreen Leopards. Heaven And Holy is the latest in a long line of collaborations between Earl and Leopards’ Glenn Donaldson under the Painted Shrines handle and faultlessly captures the warm down home acoustic jangle and primitive ritualistic percussion which has come to define the Woodsist sound.

The pair took inspiration from the soaring atmospherics of The Byrds and most heavily from ‘the Dunedin sound’ associated with the iconic Flying Nun label. The New Zealand based record company dominated the indie airwaves throughout the 1980s with a roster of groups such as The Chills and The Clean, putting out classic records of DIY jangle pop that recalled the avian folk pop hippies. In contrast to the rival Paisley Underground scene in Los Angeles who made swaggering amphetamine laced urban melodramas, the antipodean bands seemed to favour fey introspection and minimalist song structures over noise and antagonism.

That fondness for simplicity is evident on the comforting autumnal tug of album opener Saturates The Eye. Calm guitar chords fuzz and rattle as Earl’s winsome rasp scuppers along in the coral tinged jetstream. What follows is a flagrant collection of earthy folk harmonics and vibrating lo-fi pathos. Donaldson (whose other band The Reds Pinks & Purples are about to release a phenomenal summery album) has a penchant for outsiders groups like The Holy Modal Rounders, and you can hear that influence in the tumbling cadence of Soft Wasp and the dreamy resonance of Pacem In Terris, which closes the record.

Inviting Papercuts’ Jeff Moller to lay down bass over the clutch of songs they recorded in a tranquil week long session at Donaldson’s Californian home studio in 2018, their recent bout of self-isolation gave them the time needed to finalise Heaven And Holy. The upshot is a record freewheeling in scope which unfolds tastefully, never once losing sight of the forest for the trees.