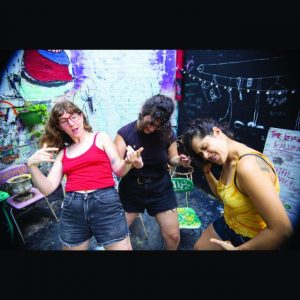 Intentionally or not, the history of the physical space where an album is put together can often seep into the recording and leave an indelible marker. Just ask Trent Reznor about the tragic backstory, and impact on the songwriting, of where he chose to write and record Nine Inch Nails moody and iconic The Downward Spiral album. Thankfully for the girls in Palberta, the venue chosen for the assembling of their fifth album was a much more joyous residence, being as it was the former family home of actor Paul Reubens, known to millions as anarchic goofball Pee Wee Herman.

Creating a supercharged creative atmosphere, recording and mixing duties were handed to the studio’s current owner Matt Labozza – who’d independently worked with such marvellously monikered bands as Sperm Donor and Yucky Duster. In keeping with that rebellious childish savant’s output, on Palberta5000 the beloved cult New York trio offer a series of musically oversized, plasticine mutations that sprang apparently effortlessly to life in under a week. Travelling beyond the accepted norms of the swarm of post punk girl groups operating at the same time, this Technicolor tinged album somehow melds droning krautrock sections and psychedelic experimentalism into its jaunty street hoodlum doo-wop core.

Early highlight Big Bad Want starts off as a neurotypical slab of Pacific Northwest inspired pop punk frivolity, the first sixty seconds of feisty call and response reminiscent of early Sleater Kinney, before it rapidly degrades into a clattering repetitive groove with the band insisting sweetly “Yeah yeah I cant pretend what I want” for two and a half minutes. Sickly syrupy verses and calamitous repetition are used to glorious effect elsewhere on Fragile Place, where anxious drum marches jostle in close proximity with sludgy angular guitars.

Hey! is a frisky new wave concoction, and the free form Egg’s N’ Bac’ is probably the closest the group comes to hardcore punk. The staccato kick drum punch of Never To Go similarly finds itself being absorbed into a confectionary blob of angelic voices. Corner Store, a longtime live show favourite finally gets committed to record, its innocuous bodega observations sharing the same pretend lackadaisical vibes as lo-fi heroes Beat Happening, with harmonies that would make Stevie Nicks proud.

The other high water mark is the speedy penultimate number All Over My, its four line lyrics acting as the playground slide over which the band mates take turns enthusiastically riding their instruments up and down. Along with the 15 other tracks pressed together, it may have a lightness of touch but is amazingly robust in its construction. If you’re not already aware of Palberta, you should come visit their playhouse. It’ll be a big adventure for sure.