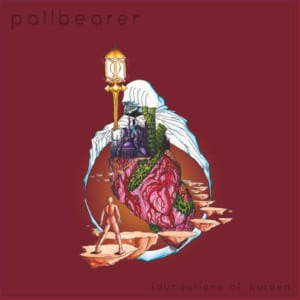 With the release of their phenomenally well received debut album Sorrow And Extinction in 2012, Pallbearer set the bar high for themselves. If there’s a basis for burden on the band it most surely begins with that album and just how to follow it up. Many bands struggle to repeat the vibrancy and energies of their initial flourishes, but with Foundations Of Burden, Pallbearer take a step forward and, if anything, surpass expectations.

For the uninitiated, Pallbearer sound much as you would expect a band with that name to sound. They inhabit a dark and gothic world populated with slow, dense riffs and emotive vocal strains. To call them a doom band would be accurate, but it also would be something of a disservice. Certainly there are doom elements to their sound (predominantly, the slabs of granite heavy riffing) and at times they could easily be compared to the likes of early Paradise Lost or perhaps Cathedral, but Pallbearer are not content to merely plough a solitary furrow. Four of these six songs stretch beyond the 10 minute mark, not merely because of the slow time signatures, but because the band are committed to creating labyrinthine structures and complex musical narratives. There are elements of doom to their sound, but they also embrace the nature of prog rock too (final track Vanishing is a perfect example of the band’s prog leanings) and in doing so, give themselves scope to explore their themes of light and shade fully. It’s this balance between light and dark that the album seems to revolve around both lyrically and musically.

Opening the album with the colossal riffing of Worlds Apart, the band wastes no time in establishing its existence in the shadowy netherworlds. “Without Light, the dark encloses all” intones Brett Campbell, before continuing “without dark, the light burns out our eyes”. If it seems like an unworkable situation, there is some hope later with the lines “darkened heart, enlightened mind, whole worlds apart, remain entwined” which suggests that there is at least some balance to be found. It is worth noting too that Campbell’s vocals set Pallbearer apart from their contemporaries. Not a growler in the slightest, his style instead harks back to a time when bands at the heavier end of the spectrum had singers (think Ozzy, or Lee Dorian in Cathedral) and his impressive range adds another melodic dimension to the band.

Foundations showcases the development in the band’s songwriting skills. Developing a thunderously heavy groove over the course of eight minutes, they eventually segue into a quite beautiful closing segment that takes the foundations of the song, and adds expansive flourishes and breath-taking layers of harmony. The Ghost I Used To Be is perhaps the finest example of what Pallbearer are trying to achieve with this album. There’s no waiting around for the emotive musical layering, it’s there from the start the crunching rhythm guitars trading off with the harmonic runs to somehow sound uplifting and full of sorrow too. Once again the themes of light and dark and the blurred lines of existence are found in the lyrics, with Campbell at the height of his powers when plumbing the cavernous depths and reaching out for the heavens.

The shortest track on the album, Ashes, finds the band in contemplative and almost ambient mood. For those requiring big guitar riffs, it will be a disappointment, but the gentle Fender Rhodes tones and washes of guitar provide a clever deviation in mood and offer some respite from the gloom and burning light. That it appears before Vanished, the intro to which constitutes the heaviest moment on the album is a small mercy in that it offers some element of hope before the crushing doom begins once again. That said, there is some comfort to be found in the closing moments of the album. “We’re always shifting, and always becoming,” sings Campbell, summing up Pallbearer’s ethos perfectly. If they continue to write songs of this statue in the future then Pallbearer could well be doom metal’s light at the end of the tunnel.