by Chris Saunders
published: 28 May 2012 in Album Reviews
Tweet 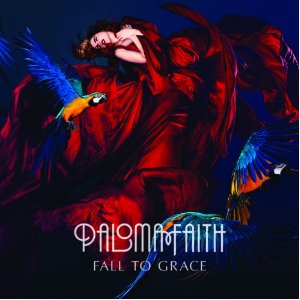 There has been a helpful symmetry between Paloma Faith and her music. On her debut album, Do You Want The Truth Or Something Beautiful? she told us that we might think her “crazy, a little bit hazy, but I’m stone cold sober” – it described well a record that reflected her penchant for upbeat, upfront pop and ballads with a quirk, a Paloma style twist.

This twist has seen her garner a reputation for being an eccentric – writing songs about cities stealing her man, performing with giant balloons attached to her limbs, getting stroppy about appearing on primetime TV shows. A pop star yes, but with a personality. The irony of all this is that, on Fall To Grace, aside from a few divergences into hitherto uncharted musical territory (mainly some diva influenced dance) Paloma Faith has produced as straightforward and predictable a record as you could imagine.

So whilst she won’t be breaking musical boundaries, it certainly doesn’t mean Paloma Faith has swapped her quirk for dross. More likely is that, the Paloma formula only has a certain number of combinations and after two albums, we’ve heard them all.

On the evidence here, Paloma clearly still enjoys a well constructed pop song with a belter of a chorus. Beauty Of The End is just that, a subtle acoustic guitar leading into a full throttle vocal whilst Agony, which sounds uncannily like Mr Brightside by The Killers tests her lungs again. Neither track leaves much of an impression – in fact both feel a bit forced, like the shell of the song had some interesting ideas but the final version has been morphed into something entirely different and more commercially accessible and lightweight.

Which may also explain why Paloma has opted to add a few radio friendly, dancier numbers on Fall To Grace. Blood Sweat And Tears has her in full seventies diva mode, synthesisers guiding the way and Freedom, with its nineties piano roll/drum machine backing sounds a bit like M People. It’s an odd song, but not in the kooky way that usually endears Paloma Faith to the listener.

That aside, Paloma’s voice is still something special, full of soul and spirit. Ballad fans will enjoy Just Be – a powerful love song featuring simply her impressive vocals and a piano. It’s a reminder of what a wonderful voice she has as well as her unique take on romance: “Let’s get old together/let’s be unhappy forever.”

Likewise, Black And Blue appears at first to be a roll call of Paloma’s bizarre circle of friends and their various issues but is actually something of cautionary tale about how nobody is happy all the time. Like Everybody Hurts but with case studies. Similarly, Let Me Down Easy is wonderfully soulful, laid back but full of the blues that she must have meant when she talked about this album channelling the spirit of Tom Waits and Rufus Wainwright.

Fall To Grace sounds like a slightly more grown up Paloma Faith. A bit less kooky, a bit more constructed and a bit less interesting than the artist on her debut. Few could deny her vocal talents but you can’t help but feel the character that made her stand out in a crowded pop room has been diluted somewhere along the line.