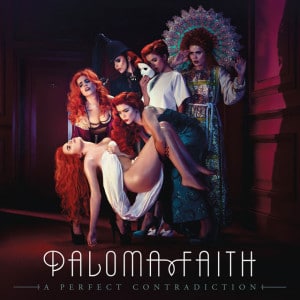 It has often been a case of style over substance when it comes to the career of London singer-songwriter Paloma Faith, ever since she arrived on the scene with her debut Do You Want The Truth Or Something Beautiful? in 2009. Her eccentric, vintage dress sense and brightly coloured hair are much more likely to come to mind when her name is mentioned than the music she has produced on her first two records.

Compared in some quarters to Duffy and the late Amy Winehouse for her retro-soul stylings, the  32-year-old has achieved reasonable success with previous singles such as Stone Cold Sober and New York, from her debut, and Picking Up The Pieces, from 2012’s Fall To Grace. However, while Faith clearly has the vocal ability to compete with Duffy and Winehouse, she is not even close when it comes to churning out the hits.

In fact, Faith’s lack of hit songs was the main reason why label executives at Epic initially passed on signing her up. Her cover of INXS’s single Never Tear Us Apart – which was released as the third single from Fall To Grace – is where most will recognise her from, after the song was used on a John Lewis TV advert. Can Faith’s latest effort, A Perfect Contradiction, succeed in producing the signature songs she’s so far lacked?

The record certainly starts off with positive intent, with man-of-the-moment Pharrell Williams attempting to work his magic on opener and lead single Can’t Rely On You. While it doesn’t quite have the pull power of his big hits from last year, the song has all the hallmarks of a Pharrell production, with a simple funky beat that is reminiscent of Robin Thicke’s Blurred Lines.

Lyrically, Faith continues to sing about relationship problems, despite the sound of the record being much more upbeat than previous offerings. “Yeah, you got that good stuff but that don’t last/ so I just can’t rely on you,” she sings fiercely on the opener. Only Love Can Hurt Like This – if you hadn’t already guessed from its title – follows in a similar vein, with Faith channeling her inner Winehouse more than at any other point on the album: “Your kisses burning to my skin/ only love can hurt like this.”

However, other than Only Love Can Hurt Like This, A Perfect Contradiction is actually quite a fun and carefree record. Mouth To Mouth is an early example of Faith’s determination to create a record to dance to, with its funky bassline and sparse keys creating a disco pop song that would not sound out of place on a Whitney Houston album, while John Legend collaboration Take Me has a touch of Motown about it. The highlight of the album, though, is undoubtedly Other Woman, which is produced by Plan B. It has all the elements you could want from a pop song, with the big band production and Faith’s powerful vocal combining to create a rushing, infectious chorus.

Yet, while there is nothing wrong with this mainstream positioning, it does get somewhat tiresome and predictable as A Perfect Contradiction reaches its conclusion – and there are still no obvious big hits. The Bigger You Love (The Harder You Fall) is a straight up pastiche ‘60s ballad, while Impossible Heart and closer It’s The Not Knowing are largely forgettable.

Despite the anticlimactic finish to the album, A Perfect Contradiction is a solid and accomplished return from Paloma Faith. There’s nothing here that has not been done before, and it’s almost too polished for its own good, but she sounds more at ease with her sound than ever before.