Panic! At The Disco – A Fever You Can’t Sweat Out 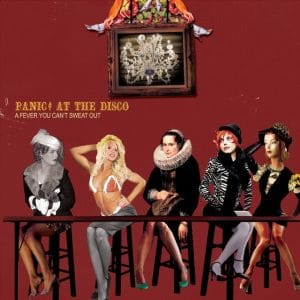 What’s the world coming to? Brandon Flowers appears, and before he can finish despairing about how “it was only a kiss”, the eyelinered emo kids have picked up on his emotional turmoil, raided The Killers‘ tour bus and stolen his synthesisers to have some tortured heartbroken fun of their own.

The name sums it up – Panic! At The Disco are frenzied, insane, paranoid and a little screwed up, but they’re not going to let that stop them from dancing and having a good time. Dancefloor filling emo? Can it really be true?

There’s something of an acoustic Bloc Party to the beginning of The Only Difference Between Martyrdom And Suicide Is Press Coverage, but before you know it, they start sounding more like Fall Out Boy on speed.

This album takes things that emo kids should abhor and makes them sound like a match made in heaven – like that vocal effect used on Cher‘s Believe, and a garage beat that Craig David probably used in those early days of Re-rewinds and Bo Selectas.

Unlike The Bravery, this bunch don’t waste time trying to be cool because they understand that making music with feeling is the real path to recognition. And if this album doesn’t make them an international success story, I’ll eat my eyeliner.

It’s brash, in your face and despite its unarguably emo vocals, the lyrical content of the songs doesn’t seem very depressed at all. In fact, with lines like ‘Let’s get those teen hearts beating. Faster faster!’ it looks like Panic! At The Disco even have a few sack loads of self esteem.

One thing that seems clear is that these are not the kind of guys you want to fall out with. My Chemical Romance may have given three cheers for sweet revenge, but with the twisted plotting and simultaneous merriment being had in There’s A Good Reason These Tables Are Numbered Honey, You Just Haven’t Thought Of It Yet, you can tell these songs were made to be sung along to with a slightly psychotic smile plastered across your face.

The album’s highlights have to be the initially plinky-plonky and then seconds later screamtastic Camisado, the rather self-explanatory Time To Dance (get ready to shout ‘Shotgun’ and ‘Wedding’ – don’t ask why) and the absolutely phenomenal I Write Sins Not Tragedies – the messed-up emo equivalent of Busted‘s Crashed The Wedding.

The rest of the world has been chuckling at emo for far too long, but this album is sure to silence a lot of those laughs. It’s ambitious, exciting and energetic, and like a cat being given a bath, you can put Panic! At The Disco in the emo tub and it’s probably the right thing to do, but you’re still going to find yourself splashed to the point where you’ll have to wring out your shirt of unanticipated droplets of danceable pop.