Panic! At The Disco – Vices & Virtues 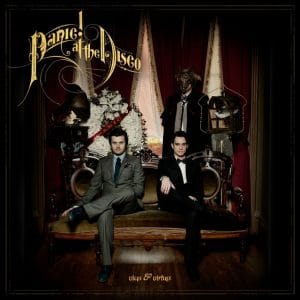 Panic! At The Disco are a band with smarts and tunes. They’ve also got an impeccable disco-rock rhythm obsession. This makes them easy to loathe. But new album Vices & Virtues is all but flawless.

Bursting out of the starting blocks as it became apparent that Fall Out Boys‘ rise was going to be astronomic (indeed Decaydance honcho and Fall Out Boy poster boy Pete Wentz fed this Vegas band to Fuelled By Ramen). As a Las Vegas band P!ATD share big top theatrics with fellow Las Vegans The Killers, though P!ATD write songs with the untempered energy of an in-form Duran Duran.

Vices & Virtues rolls along in swelling pop reverie. Opener and lead single The Ballad Of Mona Lisa drops in with the stop-start bombast of their debut and that classic mix of spiked rhythm and full, round, production that make the Decaydance stable so attention grabbing. Throughout, melodies stretch and dance with grace.

There’s also humour here, and probably the most out-and-out ‘fun’ anthems to have been pumped into the US guitar pop scene in many a month. Hurricane really steps up the dance rhythms to a chorus of “You will dance to anything” where as Ready To Go (Get Me Out Of My Mind) matches immediacy of melody with a depth of production, an anthem with interesting sounds and, of course, propulsive rhythms.

Vices & Virtues also blends in the Beatles-esque influences of Pretty.Odd that initially made debut fans twitch. Fans of A Fever You Can’t Sweat Out will have their blood pressure lowered as Vices & Virtues tones down the baroque – a touch – though Brendon Urie’s harmonies still carry that slight psychedelic use of scale and mode.

Then there are the undeniable hits. The Calendar eases out catchiness, bombast and whimsy with that particular blend that devours US radio, teen sound tracks and road trips. It’s the clichéd American dream lifestyle summarised perfectly, the toil and angst of teenage emotional development in three minutes. Whatever your tack on this, The Calendar has got the combo spot on.

Vices & Virtues a brilliant album. Certainly between this and …And You Will Know Us By The Trail Of Dead‘s Tao Of The Dead, America is really getting its groove back even while old England still flounders around trying to find a band that can wrap a retro sound in edgy marketing potential. ESTA application, please.