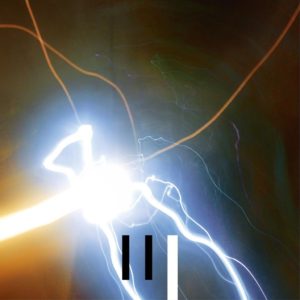 The Triad was borne out of desire to “cut through the digital dust that surrounds us” and a need to reconnect with people rather than the seclusion afforded by creating with modern technology. The people in this instance happen to be members of The Bell Laboratory and Queens, providing the ‘human touch’ in an otherwise sterile landscape.

Opener The Winter Hymn sounds not unlike (if belief could be suspended into imagining) Fleet Foxes suddenly deciding to go ‘Ibizan chill’. Banks of falsetto harmonies hover in a heat haze over a shuffling house beat, with chimes filtering like rays through dense cloud. Weber has spoken of the similarities (for him) between the forest and the nightclub, where both are alive, visceral and expeditions of sorts. On The Triad the fusion seems complete with ethereal melodies cantering between rhythmic pulses as on the budding bleeps of You What? Euphoria! The moody swathes of sound snaking around Frau Im Mond, Sterne Laufen shift the mood into reflective introspection, while crystalline micro-beats slice and dice Chasing Vapor Trails before a wandering bass-line morphs the track to sound as if beamed from an aquatic base.

Weber’s use of vocals (including his own) throughout The Triad give the album the humanist grounding absent in previous releases. Whether they are decipherable, or coherent, In An Open Space builds gently from an acoustic loop before breaking down, only to return with ghostly choirs cooing reassuringly. On the gently looping Islands In The Sky, Weber emerges from the shadows doing his very best Brian Eno monotone singing over the downbeat beauty.

The Triad again bears influence of Weber’s heritage. His youthful experiments in recording the sounds computers made when crashing were supplemented by adding beats, and this had been steadily built upon with each ensuing release. Instrumentation is here still predominantly electronically-originated with washes of sound, processed beats and melodies beamed over the top to give light and shade.

As with Weber’s previous output, The Triad weaves a dense mesh of sound and melody that never succumbs to fashion. Resolutely trimming away the unnecessary to leave a minimal, but affecting, template of emotive soundscapes that neither overwhelms nor becomes mere background music. Album closer Wallflower For Pale Saints sounds like a piece of sleepy Pink Floyd space cadet-fodder and ends The Triad as it began, with one eye on the heavens awaiting divination and some solace. The Triad edges ever closer to the purely experimental, with another tentative step rather than a bold foray into the electronica wilds, but for now it’s a worthy diversion from the well-trodden paths of other techno producers.