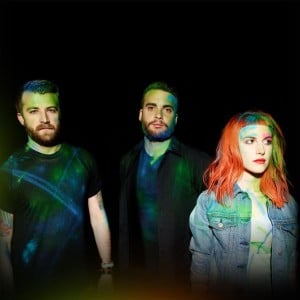 This symbolically self-titled album is Paramore’s fourth offering, but more importantly it’s the first record from the new line-up after tensions and good old sibling rivalry led to the departure of Josh and Zack Farro two years ago. Drafting in Ilan Rubin, of Nine Inch Nails and Lostprophets fame, to take up the sticks has undoubtedly changed the sound; furthermore the overall line-up shuffle has seen a shift in dynamics as regards songwriting, with Hayley Williams taking much more of a firm grasp on proceedings.

Fast In My Car immediately throws the limelight on Rubin, kicking off with a confident if not slightly poppy beat turned right up. The track is awash with colour and texture; the guitar lines are melodic and the synths produce a lush sound that’s pretty summery, something that first single Now certainly didn’t allude to. Catchiness is key here, with its radio friendly hook making up for the forgettable lyrical content. It’s not quite Two Door Cinema Club in its production, but it isn’t a million miles away. And this style rears its head throughout the album on tracks like Ain’t It Fun, which again is hardly a lyrical masterpiece; but the music compensates for the rather serious “all alone in the real world” vibe.

What the album’s first two tracks do share is a vocal sound reminiscent of Gwen Stefani, and the No Doubt comparison continues on Now with its fast and fuzzy guitar riff. The guitar has a different role on this album; it’s quite low in the mix and most prominent when in the form of jangly arpeggios. This is most noticeable on Part II, a sequel to Let The Flames Begin, which is crying out for an explosive guitar chorus that sadly never comes. It’s all rather restrained musically, and although the vocal is strong, the kick-in leaves a lot to be desired.

Last Hope is yet another soft, mushy ballad with slightly clichéd lyrics like “it’s just a spark, but it’s enough to keep me going”. On an album of this length these types of songs can drag unless the listener emotionally invests in the themes, something Paramore fans will be exposed to more than ever on this record which Hayley Williams has described as a “big love anthem to our band”. Still Into You, like Grow Up, features a funky, angular riff that slides into a rather more generic chorus that absolutely reeks of Taylor Swift; the band have definitely lost some of their heaviness, though fortunately not at the expense of their attitude. Anklebiters has a wonderfully simple but uplifting guitar; it’s more Busted than Black Sabbath but it still feels urgent, heartfelt and not at all manufactured.

Coming in at a mighty 17 songs, Paramore have given themselves plenty of space to experiment with, but it’s too long to enjoy in one sitting, with some of the drum sounds and hooks beginning to feel quite repetitive after a while. The Interlude trio of songs does what is says on the tin and provides strip backed ukulele based tracks which Williams pulls off with great charm, but even these aren’t enough to eliminate some of the monotony. Reward is waiting however if one does make it to the last track Future. Starting off with what seems like a pretty raw live recording it morphs into a huge swamp of sound and noise, something Explosions In The Sky wouldn’t have been ashamed to write.

The influence of new blood mixed with Paramore’s own distinct sound has created a vibrant, melodic record with sing-along choruses, and although it flirts with the softer side of the rock spectrum it’s still one ballsy album.