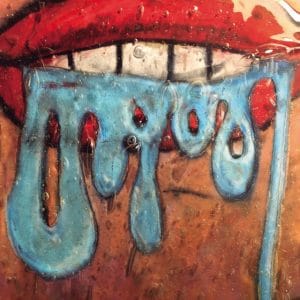 The grungy opening bars of Back From The Dead launches the latest collection from Camberwell’s noisiest sons. It’s a felicitous pick given that Part Chimp generate a racket that could conceivably raise the dearly departed. The track’s zombified grind kicks off a run of four absolute blinders and signals that you’ll need to hold on to your soon-to-be battered senses.

Famed for their skull-crushingly loud gigs, it’s perhaps easy to assume that volume and pure noise takes precedence over anything remotely artful. But there are actual tunes here, and in abundance. Not to mention an array of thrilling riffs that lay the foundations for magnificent builds, edging each track skywards. Part Chimp are undoubtedly shambolic, but there’s a visionary method in the madness.

Just a few tracks in and it’s clear that Drool builds on the triumphant return that was IV. Wallow allows the listener to do anything but via a barrage of glorious noise, while the grotty hypnotics of One In The Eye are paired with the grinding thump and arching guitars of Clever. On this evidence alone it’s astonishing they remain a cult concern.

Largely, the album is pitched at an ear bleeding level. Up, With Notes’ spiralling guitars, pummelling drums and shouty vocals rip though your lug holes with the energy of a toddler five cans deep into a six-pack of fizzy pop. Elsewhere, It’s True, Man confirms this is not a record for those in the throws of THE FEAR, post-big night out. Nope, the nerves won’t take it. Drool is a record to listen to when you’re feeling stable enough to withstand the battery it readily shells out.

That’s not to say there aren’t slightly gentler moments here and there. Well, perhaps just the one, in the form of the bright, and extremely trippy, interlude Howboutakiss. And the three-piece do hint at a weirdly wonky breather during the early stages of Dirty Bird, which in more conservative hands would allow their dear listeners time to recoup. But no, the application of creepy guitar licks paired with the track’s building loud/quiet dynamic make this an inappropriate time for a little R’n’R.

The album closes with the double thump of USisA and Worms. The latter’s melange of discordant riffage and muddy vocals is far from a soothing way to sign off. While the former hammers it way into your grey matter with shrill, escalating riffs and an uncurbed vocal attack.

All-in-all, Drool is a collection of brilliantly horrible noise. It’s endlessly compelling, deliciously grimey and a little bit silly. You wouldn’t need to draft in Russell Grant to have divined that Part Chimp’s second chapter would be as noisy as the first, but it might have taken some cosmic skill to predict it would be quite this good. More than 20 years in and the band show no signs of embracing moderation, thankfully. Drool is a delightful reminder of quite how wonderful it is to be vigorously shook by mercilessly heavy music.