Pat Metheny – What’s It All About 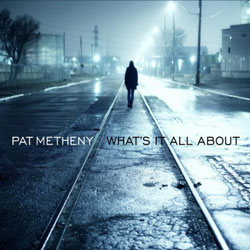 Pat Metheny has long pulled off that rare and brilliant trick of having a distinctive, instantly recognisable sound and approach whilst rarely, if ever, repeating himself musically. In recent years, he has made a brilliant piece of long form composition with The Way Up, recorded a splendid trio session with Antonio Sanchez and Christian McBride on Day Trip before rendering all his musical collaborators redundant with his Orchestrion project last year. Orchestrion felt rather like a grand folly – a substantial technical achievement, but one that inevitably felt a little cold without the interaction and spark generated by a real, living ensemble. Nevertheless, it has clearly sparked Metheny’s imagination, because he has now returned with another solo project.

Amazingly, What’s It All About is the first album in Metheny’s long career not to feature any originals. Instead, it features acoustic guitar interpretations of some very familiar songs (although mostly not tunes associated with the standard repertoire in jazz), strong melodies that Metheny has lived with all his life. These sorts of albums, on which influences are openly and proudly displayed, tend to be dismissed casually by critics impatient for the next piece of wild originality. For this reason, What’s It All About will no doubt be taken for granted, in spite of being a beautiful, deeply felt and very important collection of performances.

For all of jazz’s many and unique virtues, it can sometimes be a frustratingly macho arena, in which musicians compete to play the most dazzling solos, sometimes forgetting the source of the music in the process. On What’s It All About, Metheny takes a refreshing step back and investigates the impressive melodic resources not just in his own improvising, but also those inherent in his choice of material. This project is all about what Keith Jarrett described as having ‘respect for the song’. He plays with considered economy throughout. All these performances come with individual and convincing layers of interpretation – but everything seems to come from the springboard of the original melody.

The pieces are mostly performed on Metheny’s customised baritone and nylon-stringed guitars. So whilst listeners may not associate Metheny with tunes such as The Associates’ Cherish, The Stylistics’ Betcha By Golly Wow or Paul Simon’s The Sound Of Silence, they will certainly associate him with the personal, distinctive sound he achieves on these instruments. His improvisations around the themes are tasteful – but not in an overly polite, restrained way. It is more that Metheny is deeply sensitive to the emotions the songs conjure in their original incarnations. It seems as if everything he plays is designed to expand and develop those feelings. Perhaps best of all is his take on The Sound Of Silence, on which he uses the powerfully resonant, eastern sounding 42 string Picasso guitar.

On a couple of tunes, Metheny has a real sense of play and adventure. Girl From Ipanema is removed from its over-familiar bossa setting and slowed right down. It’s still very much recognisable but it feels elegiac and melancholy in this arrangement. Metheny leaves vast amounts of space, so that the silences become as important as the notes. Perhaps most unexpected of all is Metheny’s take on the old surf hit Pipeline, on which he accompanies himself with strongly strummed chords gradually building in tension throughout the sequence. The piece also demonstrates his rhythmic awareness, a quality in his playing not always mentioned.

By its very nature, What’s It All About is both intensely focussed and somewhat personal. Some may even see it as sentimental, although Metheny’s playing for the most part avoids the lachrymose or saccharine. For those with open minds and without unfair expectations of artists, it will be another fascinating addition to a long and exceptional career.