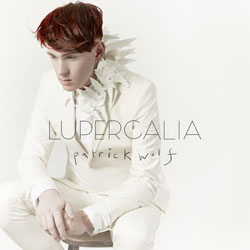 Patrick Wolf has never been one to shy away from grandly elaborate orchestration, and this is the greeting to the eagerly awaiting ear drums on his fifth studio album Lupercalia, named after the Roman precursor to Valentine’s Day. This romantic reference, which will make those who have studied Classics squeal with joy, is also entirely suited to this collection of illustrious pop which documents the now engaged Wolf’s relationship with fiancée William Charles Pollock.

Being dropped by his record label and to then go on and release a fourth album created by selling shares of it to fans clearly hasn’t slowed Wolf down. Now once again signed (through his own Hideout imprint) to a major label, Wolf opens Lupercalia with The City, perhaps one of the most perfectly romantic pop songs ever to grace an album. In fact, the entire album is reminiscent of the grandeur and elegance of the great composers of the Romantic 1800s, yet with an incredible pop ideology that lays on hook after hook which refuse to remove themselves from the ol’ grey matter once in there.

Lupercalia continues with single House which is perhaps the most infectiously joyous three and a half minutes one can experience from a set of headphones. With the release of this album the commuting public should expect many more fellow commuters grinning crazily to themselves on public transport. It is utterly contagious. This theme is continued in Bermondsey Street which allows a moment’s rest from the power pop of the beginning tracks before kicking into gear and attempting to deliver the same surge without quite getting all the way there.

The Future continues the trend of the intensely catchy melody but now but then begins to settle into a softer vibe before a climactic end, leading into the slightly darker Armistice, inspired by a Manx Gaelic folk song which gives a sonic flipside to the upbeat and in-your-face romanticism of previous tracks. The following songs continue this more subdued feel, reaching their peak on single Time Of Your Life which evokes a swathe of sublime poignancy and hope to be “happy without you”.

Momentum is lost slightly by meandering around the point in this more sombre tone on ballad The Days, but the strong forward pull begins to rebuild itself on Slow Motion with dramatic strings, yet doesn’t fully pick up again until Together which blends the catchy pop of the first half of the album with the tendency toward the melancholy of the latter half, with grand strings and sweeping female backing vocals framing Wolf’s rich baritone. The album ends with The Falcons, a track of pure, hopeful bliss proclaiming: “Things are looking up for us, finally.”

Finally, things certainly do seem to be looking up for Wolf, with an album of unapologetic positivity that evokes an intense joy, rather than becoming cringeworthy and cliché. While there is a brief moment of slowing to catch its breath in the latter half, the album quickly regains speed for a triumphant finish. It is, all in, absolute genius.