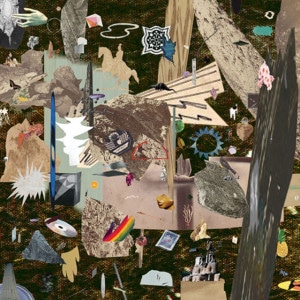 It’s not the easiest of tasks to write about patten, mainly because there hasn’t been much circulated about the unidentified, photo-shy Londoner. His Twitter feed is a stream of links to things such as the Wikipedia page for Theseus’ Paradox and his live appearance on BBC Radio 3’s Late Junction didn’t reveal too much, aside from the abstract.

His label Kaleidoscope is, apparently, “more like an ecosystem” than a label, while his live sets are “atypical” and full of experimentation. He then entered into a discussion that was rather space-time continuum-like: how time is difficult to separate and that every moment of our lives, from the conversations we have to “the feeling of the sun on the back”, all shape and lead us to where we are in the present. For patten, he hopes the minutiae of his life and the environment around him have been captured in ESTOILE NAIANT, his second full-length album since 2011’s Glaqjo Xaacsso.

Opener Gold Arc is rather Fuck Buttons-like, with post-punk funk bass submerged beneath shifting effect-strewn guitar that pans from side-to-side. It’s evocative of My Bloody Valentine‘s Kevin Shields, whom patten cites as an influence. There is a vibrancy to this that evokes the richness life can often bestow, with spoken word and conversation in the background as well. This certainly fits into patten’s view on time and life’s experiences.

With any album or artist termed avant-garde and experimental, there is often trepidation at the prospect of tracks that last longer than 10 minutes. Yet these tracks are refreshingly short; Here Always, at just three minutes, is mysterious and occult-like, with deep-sounding vocals verging on laments against crackling bleeps, high-pitched ringing loops and sudden drops of dingy, grimy bass. Meanwhile, the four minute or so Drift sounds typically Warp in sound and texture and is rooted in the sound world of Aphex Twin. Very decent, although not particularly striking.

patten cites the boombox and the Walkman as influences, which seems to suggest he is eschews digital somewhat and rather likes cassettes. (Indeed, his Kaleidoscope label releases on cassette.) This comes through in Softer, with booming shots of bass and touches of Homogenic period Björk. It’s all very avant-garde sounding, yet like Drift there’s nothing that particularly enthuses here or seems different to anything Warp and others deliver. patten may say that the various experiences and influences in your life shape you in your sort of ‘journey’ with time, but here they seem to hinder him in some respects.

Yet that is just about forgotten when the six-minute Key Embedded comes later, which is very impressive: rich and busy, it fuses elements of techno with intricate, algorithmic beats reminiscent of Autechre. This is particularly challenging and thrilling to listen to, with multiple layers and textures emerging and spoken word samples creeping back in again before reaching Fuck Buttons territory towards the end. Album closer LL2, at just over a minute-and-a-half, is a brief yet relaxing sort of white noise conclusion that washes over quite pleasantly.

At times, ESTOILE NAIANT is a challenging and occasionally thrilling listen, as Key Embedded particularly demonstrates. But it’s almost too typically Warp in its sound and composition. This may be rather unfair, for much of the music released by Warp down the years takes time and many listens to grasp entirely. There is the definite feeling that this album could well be at home amongst the celebrated label’s considerable catalogue.