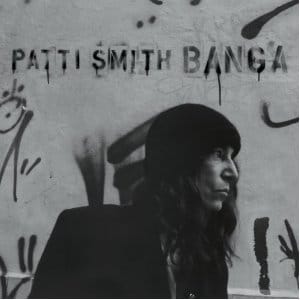 Patti Smith has spent much of the past few years emphasising her qualities as an artist in the broadest sense, receiving acclaim for Just Kids, her memoir recalling her relationship with photographer Robert Mapplethorpe and continuing to write poetry. It feels as if she has hardly been away from the limelight, but Banga is in fact her first album containing new original material since 2004’s Trampin’ (the only intervening release, 2007’s Twelve, was a not entirely successful detour into interpretation).

Banga, named after Pontius Pilate’s dog in Mikhail Bulgakov’s brilliant, visionary novel The Master And Margarita, captures Smith at her most literary and adventurous. Occasionally, she can veer either towards the portentous or the preposterous but, at its best, Banga is a valuable reminder of her gifts. Whilst her mature period has been consistently interesting, there has been a recurring difficulty in achieving the unforced intensity of her early work. Occasionally, albums have suffered from leaden pacing and a lack of subtlety in execution. Banga is impressively varied and often displays a softer, gentler quality to her vocal delivery. This may be some of the best of her recorded singing.

There are some quite unexpected gems here. The wholly sincere and in its own way really rather brave girl group pop of This Is The Girl is a tribute to Amy Winehouse and one of the most straightforwardly delightful and touching songs Smith has ever recorded. There have been few tribute songs written at this level of honesty and eloquence. Maria is lilting and contemplative and bears a passing (surely coincidental) resemblance to Lesley Duncan’s Mr. Rubin. The bucolic and captivating Seneca suggests that Smith has taken inspiration back from those artists, particularly R.E.M., that were inspired by her.

This being a Patti Smith album, however, simplicity and directness were never likely to be the orders of the day. The opening Amerigo plays a trump card very early on – a string-laden, expressive and evocative narrative concerning the first European explorers journeying to the New World. Fuji-San is another complex, verbose narrative presented as a song for Japan in the aftermath of the 2011 Tohoku earthquake. It is married to the driving, slightly heavy-handed classic rock that has characterised much of her more recent output. It’s likely that the song here closest to Smith’s heart is the ten minute poetic epic Constantine’s Dream. It’s a dense, allusive, turbulent and occasionally grandiose barrage of ideas that veers through many moods. It’s the one moment here that really captures the radical, unrestrained Smith (‘oh lord, let me die on the back of adventure!’). As such, it will be hugely divisive. Much of Banga, and Constantine’s Dream particularly, is infused with Biblical imagery and explorations of faith.

There are some rather polished, mainstream moments – particularly on the radio friendly rock of the single April Fools (which rather resembles Belinda Carlisle but is rescued by some lovely guitar work from Tom Verlaine) – and also some experiments that don’t quite work. The closing cover of After The Goldrush feels like something of a reflective epilogue after the frazzled extemporisation of Constantine’s Dream, but is played so faithfully to Neil Young’s original (save for the updating of the lyrics placing Mother Nature on the run in the 21st Century instead of the 1970s) as to appear futile. The use of a child’s choir at end, the closing sound of the album, is a substantial faux pas. It still seems likely that there is a great interpretive voice within Patti Smith – but it has yet to find a viable and relaxed outlet.

Much of Banga is dependably excellent and it is never anything less than competent. Yet there is still a sense that Smith, as an exalted artist of the critical mainstream who is not exactly required to have ‘hits’, might just let go a little more. If only her music might just occasionally match the freeform, flighty, extravagant nature of her words. There is perhaps an attempt to do this on Tarkovsky (The Second Stop Is Jupiter), which borrows from Sun Ra, although it feels more impressionistic than abstract.