by Rosie Wilby
published: 21 May 2012 in Album Reviews
Tweet 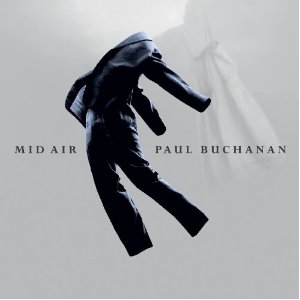 Eight years in the making, and the best part of three decades since The Blue Nile’s heartbreaking debut A Walk Across The Rooftops, comes this understated gem from Paul Buchanan, the Glasgow trio’s erstwhile frontman, on his own label. Written in the early hours at his kitchen table and in the wake of the death of a close friend and the slow disintegration of the band, Mid Air channels the ghosts of his previous best work.

Now 56, Buchanan still possesses an ache of a voice and imbues unusual images (“cars in the garden”, “jesus on the telephone”, “summer’s on its way, like a millionaire”) with a daydream-like quality. Minimally produced at a friend’s house on the Scottish East Coast, the album consists of 14 world-weary keenly observed micro-symphonies (most are less than three minutes long). Buchanan’s vocals and dancing piano playing are bolstered only by airy synthetic tapestries of strings that float in and hover over closing choruses, as if wary of waking the sleeping city.

Love is the overriding theme, with the opening title track setting a template of yearning in simple heartbreaking details: “The buttons on your collar, the colour of your hair, I think I see you everywhere.” Buy A Motor Car dreams of an escape from the claustrophobia of a relationship, yet maintains that sense of gravity, of pulling back towards home and family, while Newsroom is loneliness distilled into a whisky glass as lights go out on empty buildings, and perhaps, slowly on life. The “tears in the car park” depicted in Wedding Party are as devastatingly tangible as the “late night train” windows he sang of years ago.

If anything, it’s all a bit too modest. Buchanan nearly discarded these songs altogether, which were by-products of intriguing abandoned attempts to write a solo record for Garbage’s Shirley Manson (now, what would that have sounded like?), yet realised there was something authentic there.

Buchanan still only calls Mid Air a “record-ette”, and it had a working title of Minor Poets Of The 17th Century. The distinctive buoyancy of his rooftop observations occasionally demands a little further flight, a few more deft electronic touches, a deeper exploration than these stark and simple compositions only hint it. Many Blue Nile classics whispered their way to five minutes without outstaying their welcome, and there’s plenty here that could have done the same. It’s a minor quibble, however, when an album sounds as lovingly crafted, honest and subtly passionate as this.