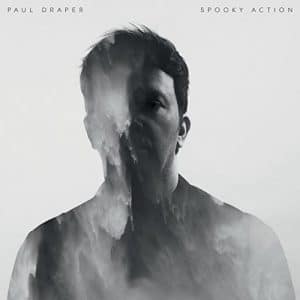 When Mansun’s debut album The Attack Of The Grey Lantern landed in February 1997 it created a flurry of excitement. Here was a band capable of combining Britpop crowd pleasers with more expansive, progressive thoughts, and in songs like Taxloss demonstrating a lyrical awareness ahead of their time.

The group imploded while recording their fourth album, but their spirit remains strong in the hands of singer Paul Draper, who suffered from a rare form of cancer in the process. Times may have been tough for him, but if the content of Spooky Action is anything to go by the cathartic process of recording has brought out the very best of his musical zeal.

The big difference between this and Mansun albums The Grey Lantern and Six is in the lyrics. The band’s sweeping vistas of the 1990s spoke of lofty ambition and grand designs, but now Draper is picking over the pieces of failed friendships with uncomfortable honesty. “Never trust your friends, just keep your eye on them,” he warns in Friends Make The Worst Enemies, before tellingly observing how “You don’t really know someone, till you fall out with them” in the song of the same name. This is the lyrical heart of the album, and the music – frenetic, crazed and psychedelic up until now – stops in respectful stillness as Draper muses on reaching the place that provides the impetus for the whole album.

Musically, if you wanted a return to Mansun’s golden years, then you have come to the right place. The radio friendly pop may not be quite so much in evidence, though Jealousy Is A Powerful Emotion and Feeling My Heart Run Slow make a strong play for the ears. The end product is more a fusion of Draper’s most ambitious musical ideas with content that reflects his innermost thoughts. He sings almost constantly throughout, and the voice sounds good, soaring with the familiar contours of old but also revealing an unexpected, Dave Gahan-like baritone in Who’s Wearing The Trousers.

The production, with Catherine AD (The Anchoress) and long time collaborator Paul PDub Walton, brings back the silvery strings but also makes room for shambling grooves in the slightly telegraphed Can’t Get Fairer Than That, the psychedelia of ragged opener Don’t Poke The Bear and the questioning songwriting of The Inner Wheel. Here he wrestles with the question “Is medication the answer, or is ignorance bliss?” with the music stripped back in thought.

There is however an assurance and raw power running through Spooky Action that transmits terrific energy, in spite of the vulnerability at its heart. If at times you fear for Draper’s wellbeing, the sheer strength and conviction of the production and vocals ultimately win through.

It may have been a long time in the making, but Spooky Action is the album Mansun fans have been waiting for. It brings them up to date with Paul Draper’s considerable struggles, but in using music as the ultimate weapon he goes some way to exorcising his demons. It marks a powerful beginning to a new solo chapter for an instantly recognisable vocalist, who clearly still has an awful lot to say.