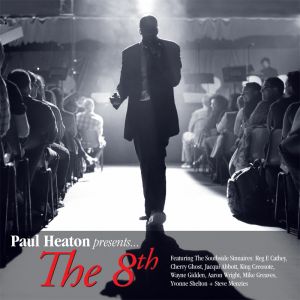 Paul Heaton turned 50 this year. Normally when musicians reach that age, they are either content to rest on past glories or gamely attempt to recapture the sound and spirit of their youth. Paul Heaton is one of pop’s few exceptions as he marks his celebratory year with one of his most ambitious musical projects.

Since disbanding The Beautiful South in 2007, citing the typically contrary reason of ‘musical similarities’, Paul Heaton’s career has been rather low-key. A couple of gentle country influenced solo albums have accompanied a jaunt around the country cycling from pub to pub playing gigs on the way. The 8th is anything but low-key. It is the sound of Paul Heaton rediscovering the idiosyncratic ambition and vitality that marks him out as one of the UK’s greatest songwriters.

The 8th is described as a ‘Soul Opera’. Primarily conceived for the stage, it is intended as one long continuous piece based around the seven deadly sins. The opera features a selection of Paul Heaton songs sung by a number of guest vocalists telling stories about these sins rising to a crescendo as the titular 8th sin – gossip – is revealed. Fleshing out the story of the sins is a narration written by playwright Che Walker and delivered with astounding power and gravitas by actor Reg E Cathey, who will be most familiar from his role as Norman Wilson in The Wire. The whole thing is blindingly ambitious and the album makes for an extraordinary listen.

The premise may be far removed from anything Heaton has attempted before but there are clear hallmarks throughout the album. The lyrical themes of politics and the relationship between the personal and the political, capitalism racism, violence and ultimate redemption are common themes in Heaton’s work and the scope of the project brings out some of the best songwriting of his career brought to life by some excellent vocal performances.

Musically the songs are an at times overwhelming mesh of sounds. The mood veers from atmospheric and dark dubby electro to squelching electronica to joyful gospel with country interludes and orchestral codas in-between. There are times when the musical backing conjured up by Heaton in collaboration with former Beautiful South partner Dave Rotheray and new collaborator Johnny Lexus is overly frenetic and unstructured, but the freeform spirit of the music matches the stream of consciousness style of the narration given by Cathey, which has strong echoes of Gil Scott-Heron‘s impassioned delivery. The beauty, however, is mostly in Heaton’s songs.

Lust is a dramatic piece of orchestral soul performed with gusto by Wayne Gidden that works extremely well but it is eclipsed by three quintessentially perfect Heaton songs in the second half. Kenny Anderson of King Creosote sings gluttony with playfully jazzy panache and it is a mesmerising mix of insanely clever lyrics and imagery which perfectly illustrates the theme. Greed is a hearstoppingly soulful acapella piece sung beautifully by Simon Aldred of Cherry Ghost. The a cappella sound harks back to Heaton’s time with The Housemartins, and this track forms something of a soulful centre of the performance.

We do not hear from Heaton himself until he explains the final sin of Gossip. Heaton’s remarkably undiminished vocals serve to (almost) wrap up the story. The song builds from a subtle reggae lilt to a jaunty climax. The overall effect is stirring in the extreme. The final word though is given to Cathey on the closing piece Walk Into The Light. It is a valedictory gospel finale with the timbre of Cathey’s voice rising to spine tingling levels as he implores you to embrace all the good things in life.

The days of Paul Heaton being a commercial mainstream popstar as he was in the ’90s may be long gone, but The 8th is proof that his creative fires still burn impossibly brightly. The real power of The 8th will likely better be expressed in its stage form, but as a recorded document the album is a staggering achievement.