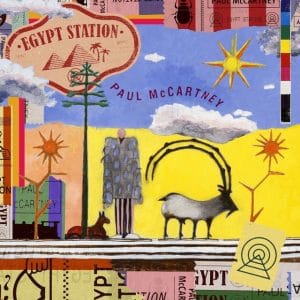 Seventy-six years in and Paul McCartney could be forgiven if he decided to hang up his bass and coast the final few miles along the long and winding road. Happily, such a concept appears to be alien to him. Egypt Station is his 17th solo release; apparently the well is far from dry, and there’s still plenty of songs left in him.   While some of his contemporaries are making a fast buck off a greatest hits tour, a farewell romp or enjoying their retirement, McCartney’s drive to continually release new music can only be commended.

Egypt Station finds him moving forward; songs that cast a backwards glance do so in an effort to make sense of it all. I Don’t Know opens with the line “I got crows at my window, dogs at my door… what am I doing wrong?”, and it’s the voice of a man who knows that he’s closer to the end than the beginning. But there’s a resolve here; he’s still got lessons to learn and there’s still time to get things right.

Confidante, a song apparently written about a guitar that until recently went unused for a long period, could be also be read as him talking about his relationship with his former bandmate John Lennon. It sees him addressing the past with stark honesty. It’s probably no coincidence that People Want Peace, a Macca spin on Give Peace A Chance, follows it.

And there’s life in the old dog yet. Come On To Me, the ubiquitous radio hit, wears a smile on its face and presumably in its trousers. It’s a typical McCartney feel-good stomper that proves that libido doesn’t disappear the moment the bus pass arrives. In a similar vein is Fuh You, a song written in collaboration with pop’s current golden boy Ryan Tedder (Taylor Swift, Beyoncé). Considering that two of pop’s sharpest minds were involved, it’s probably one of the album’s weakest moments. Despite McCartney’s way with a melody (it’s definitely an earworm), this is pop by numbers – the roots are most definitely showing.

That slight misstep aside, McCartney is keen to embrace the here and now. Working with Rhianna and Kanye West on FourFiveSeconds not so long ago, bringing in Tedder and working with producer Greg Kurstin (Chvrches, Sia, Kylie Minogue) are less the actions of a man desperate to appear current than those of someone who stays connected.

There’s evidence of this in a number of Egypt Station’s stronger songs. Back In Brazil proves the point of McCartney’s magpie-like opportunism, and talks about embracing and being influenced by other cultures. Who Cares was inspired by the supportive relationship that Taylor Swift has with her fans and addresses cyber-bullying. It’s a fairly straight-up rock number, introduced with a squall of feedback, but the message holds firm: “Who cares about you – I do”. Yes it’s a bit syrupy, but then, there’s always been a bit of the sweet stuff coating his songs. Despite Repeated Warnings might be an exception to that however, as it takes on Donald Trump and the threat of climate change without a spoonful of sugar in sight.

Despite tackling some of the big issues of the day, McCartney at his most reflective and personal is when he’s at his best. Happy With You is a love letter to his life right now. Looking back over getting stoned and drinking too much, he borrows from Mother Nature’s Son, and embraces the ageing process, finding love and enjoying making the most of life. It’s a theme that carries over into the most Beatles moment on the album, Do It Now, a song that takes his father’s advice to get on with living life and seize the day. Thankfully, McCartney appears to be grasping the nettle and squeezing the most out of life and his apparently never-ending songbook. A definite thumbs up.