Paul McCartney – Kisses On The Bottom 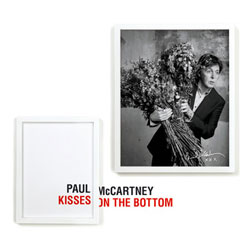 As he approaches the end of his seventh decade, Paul McCartney isstill firmly focused on the future, with a new marriage and a firstforay into the world of ballet the latest chapters in what has beenone of popular culture’s most remarkable lives. Just a few monthsafter his New York City Ballet score Ocean’s Kingdom received a mixedreception, Macca’s here again with another record, but with thecringingly titled Kisses On The Bottom, he’s very much looking back intime to the music of his childhood rather than experimenting withdifferent genres.

The influence of 1950s American rock and roll upon TheBeatles has been referenced more times than anyone can count, butMcCartney’s only belatedly acknowledged the role classic earlier USsongwriters like Irving Berlin and Harold Arlen playedin inspiring England’s greatest ever band to pen their own timelessworks. Kisses On The Bottom is a undeniably a heartfelt tribute to themusic the young Paul first heard in his native Liverpool’s exuberantsing songs, with father Jim often leading at the piano, but at therisk of sounding like another cynical naysayer who has yet to hatchout of their hypercritical egg, it’s also rather dull.

Held together by a slick troupe of musicians led by Diane Krall andwith former Miles Davis and Barbra Streisand producer Tommy LiPuma atthe controls, Kisses is a light, jazzy affair, with McCartney gentlycrooning numbers by the aforementioned Berlin and Arlen among othersbacked by tasteful piano, double bass and strings. Living legendchums Eric Clapton and Stevie Wonder (with inevitableguitar and harmonica solos respectively) drop by to pay their respectsalong the way, and the whole thing has the air of a specially recordedfor ITV Night With Paul McCartney, with the eponymous front manimpeccably turned out in his dinner jacket and wryly exchanging banterwith Bruce Forsyth between numbers.

The songs themselves are something of a mixed bag. To be fair, onlyMy Very Good Friend The Milkman, which teeters over into twee noveltywith its irritating, whimsical whistling, is downright bad, while afew others, notably Inch Worm and Bye Bye Blackbird, turn out to beunhurried, lushly orchestrated delights, sweet and sincere withoutbeing cloying. More often than not though, the tracks simply drift byinnocuously. In his prime, McCartney was a much underrated rockvocalist, but he’s clearly no Frank Sinatra and his slightly raspy,thinning tone isn’t really smooth and rich enough to be suited to thematerial here.

As well as the hoary old chestnuts, we also get a couple of newMacca originals, which perhaps to his credit slip so seamlessly intothe mix they’re completely indistinguishable from the genuine 1920sand ’30s fare elsewhere. In particular, My Valentine may be McCartneyat his most unashamedly schmaltzy, wallowing sentimentally in hisnewfound romantic bliss with Nancy Shevell, yet it also demonstratesperfectly the enduring, effortless gift for melody that has alwaysbeen his trademark.

Apparently the title of Kisses On The Bottom was lifted from thelyrics of I’m Gonna Sit Right Down And Write Myself A Letter, the 1953Fats Waller tune that opens the album. Next time, perhaps he shouldfollow that advice and write himself a firm memo to the effect thattoo much nostalgia is not always a good thing. This may sound a littlechurlish when the great Beatle’s clearly enjoying himself so much, butone suspects that few others will gain much pleasure from thisself-indulgent trip down memory lane.