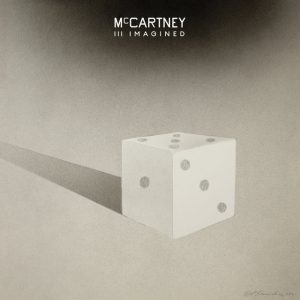 Just before Christmas, Paul McCartney released the final part of a trilogy of albums that began back in 1970. McCartney III, was the latest in a series of home-recorded, self-produced songs where all the instruments were played by McCartney himself. McCartney III, like a lot of the former Beatles‘ later material, was a mixed bag, with some genuinely surprising moments of experimentation mixed with some decidedly average songs. Now, just four months later, comes a companion album to it.

For that’s what ‘Imagined’ is – it’s not a remix album, nor a covers record, but something between the two. An impressive guest list (personally picked by McCartney himself), including St Vincent, Damon Albarn, Beck and Phoebe Bridgers, have taken a song each from the album and put their very own spin on it. The results, as well as confirming that McCartney has exquisite taste in his choice of collaborators, have produced an album arguably better than the original.

Beck is first up, sprinkling Midnite Vultures-era disco magic all over Find My Way, which in this guise sounds more like a Beck song than a McCartney one. St Vincent’s take on Woman And Wives is another success, leaving the basic structure of the song but creating a multi-tracked choir of Annie Clarks to back up McCartney. It’s a dramatic, poised and compelling version of one of the highlights of the original record.

Some of the guests don’t so much cover or remix their track as take it apart completely and rebuild it. Khruangbin‘s version of Pretty Boys is a spacey dub affair in which McCartney’s vocals float in and out. It’s a totally different take to the gently strummed acoustic number on McCartney III.

As with most of these experiments, some of the tracks don’t work as well as others. Robert Del Naja, aka 3D from Massive Attack, turns Deep Deep Feeling into a 12 minute ambient jam which strays into self-indulgence a few too many times. The infectious guitar riff of Long Tailed Winter Bird (one of McCartney’s best songs for a while) is missing in Damon Albarn’s reinterpretation which leaves the song sounding somewhat forgettable, and Josh Homme‘s sludgy desert rock take on Lavatory Lil does the impressive job of being even worse than the original song.

Perhaps the best moments are those which give a subtle, rather than radical tweak to the original. When Winter Comes was a rather twee, irritating affair on McCartney III but Anderson .Paak‘s version sounds breezy and summary. Similarly, Radiohead‘s Ed O’Brien adds some muscle and swagger to Slide to pleasing effect, while Phoebe Bridgers basically covers Seize The Day and makes it sound like it could sit comfortably on either of her albums.

Ultimately, this album will draw the attention of McCartney fans and of the artists involved, and will remain a curio for the rest. Yet it’s good to see rock’s ultimate ‘Elder Statesman’ reaching out to a younger generation and trusting them with his material. Not all of McCartney III Imagined works, but when it does it sounds genuinely exciting. And you can’t say that about the work of many 78-year-olds.