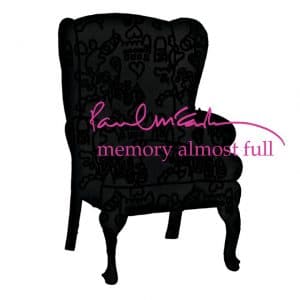 It must be tough being Paul McCartney. You can make a fantastic album, full of superbly clever musical tricks (we’ll be coming back to Nod Your Head later) and infectiously catchy silly little pop songs, but no matter how good they are, your listeners sit there expecting the music they’re hearing to not only entertain them for 45 minutes but to change modern society, if not the world. It’s as if making good music isn’t quite enough.

Because have no doubt about it, Memory Almost Full is an album full of perfect pop songs, which borrow and rework musical themes and motifs from across 40 years of McCartney’s career. At times it sounds like the kind of late ’60s sunshine psychedelica that changed the musical landscape forever (You Tell Me), at times like a trip inside the mind of someone who’s ingested more LSD than you can imagine in your lifetime (Only Mama Knows, Mr Bellamy – a Dr Robert for the 21st century – and Feet in the Clouds to name just three), and at times like Macca has been listening to too much Led Zeppelin, until you remember that everything Led Zep knew, they learned from The Beatles.

At times, in its least pretentious, soft-rock moments, there are tracks here that could be left overs from Wings (See Your Sunshine, Vintage Clothes) and those that hark back more to McCartney’s solo work of the early ’80s (Ever Present Past).

You can hear snippets and reminders of many other bands across Memory Almost Full. The Raconteurs in Only Mama Knows; Led Zep, Queen and Scissor Sisters in the rollicking pomp-rock of Gratitude, Pink Floyd in The End Of The End, but this is showcasing how much McCartney has influenced them as much as vice-versa. He’s only taking back what he gave in the first place.

There are also songs that are pure McCartney, that you could find on any album he’s released (and there have been more than 30, in total) from Star Club bootlegs to Chaos and Creation In The Back Yard. There’s the skiffle influences of UK knees-ups that lay at the heart of the Quarrymen evident in Dance Tonight, Ever Present Past and You Tell Me, the Indian strings the Beatles dragged into British rock on the drug-soaked Mr Bellamy, and the rock’n’roll he took from the Star Club’s covers through the early Beatles albums, The White Album, and back again. That Was Me could have come from the Let It Be sessions. His weakness for sentimental piano ballads gets the better of him in places, and he wanders into Silly Little Love Songs on Vintage Clothes and You Tell Me. But they’re still brilliant.

Does this make it, as the title Memory Almost Full might suggest, a retrospective album? An old man looking back on his past glories? Perhaps, but McCartney was never the one who wanted to change the world. He’s the man who, despite having taken in more chemicals than SmithklineBeecham in his life, is still seen as a cuddly uncle in a boring Cardigan. But you know that he doesn’t care.

Listen to the tricks hidden amidst the surface simplicity of this album and tell me he’s not a genius. The End of the End is When I’m 64 come full circle – an old man singing about his twilight years with the knowledge of maturity rather than a young tyke playing at the same. There’s a maudlin undertone that’s knowing in a way he couldn’t have been 40 years ago, while incorporating a whistle solo that shows staggering confidence. The flipside of this is the lyrics to Mr Bellamy: “I’m not coming down, no matter what you say / I like it up here anyway,” followed by “Nobody’s going to hold my hand”. When you can reference yourself and know that your entire audience will get it, you know you’ve made it.

But the crowning glory, the moment which should convince you that there is a connection between Paul McCartney and the musical godhead that you will never touch no matter how much LSD you neck, is the final track. Over an infectious bass line that makes you unable to resist a little gentle head banging comes the lyrics: “If you really love me, nod your head.” And that, dear readers, is true, true genius.