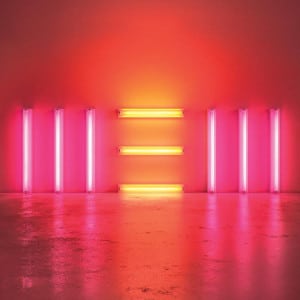 Last year’s reissue of Ram reminded those rendered cynical by Paul McCartney’s recent output, a mixture of headscratchingly noisy and predictably schmaltzy, that the sweetest Beatle is one of the best pop songsmiths of all time, sans argument. He’s back with New, whose neon, minimal album art and sparkly production from not only Giles Martin but hotshots Mark Ronson and Paul Epworth isn’t as “new” as it seems.

Instead, McCartney’s for the most part back to basics on his 16th solo studio record (and 24th overall since leaving the moptops). What he does best is write lovely pop songs, and New is a welcome return to form. It doesn’t suggest a new style, but instead newfound songwriting energy. Because it’s not the sheen of New that’s impressive. It’s the quality of the songs.

Sure, the first glimpse the public got of New was its title track, a gem of a pop song even if you’ve heard its like from McCartney a million times before. But, like the greatest The Beatles albums, one of McCartney’s latest album’s best qualities is its stylistic diversity, even if the styles McCartney adopts aren’t, in fact, new. Opener Save Us is a Back In The USSR-type charger whose refrain of “Save us now” isn’t as Muse-y as it seems. No, McCartney has not started a prog-rock phase, but instead showed us why some of the Beatles’ harder songs could have ostensibly, unintentionally, and unconsciously inspired punk and post-punk.

Meanwhile, Alligator, a Ronson-produced track, shifts from bouncy pop to psychedelia and back, all while finding room for pretty guitars that contrast the choppy guitars of Save Us. The acoustic, Fleetwood Mac-style lament of Early Days, meanwhile, displays an aging, broken-voiced McCartney struggling to take ownership of his own myth: “They can’t take it from me / if they try / I lived through those early days.” For a man once at odds with his most famous bandmate in the most famous band of all time, an intimate, yet declarative song like Early Days is much more meaningful than the empty gesture of dedicating songs to John Lennon in front of thousands during his live concerts. But while Early Days’ message is sure to reach more, it’s the hazy Hosanna that’s the more touching and better-crafted song. Although Hosanna’s subject matter isn’t as “important” or as much of a statement as Early Days, its melancholy, effects-laden acoustic guitars perfectly mirror the drama of the long-gone relationship McCartney describes.

Some songs on New are uninspired. Third track On My Way To Work is a breezy, morose pop song that has McCartney waxing poetic about the monotony of daily life with the usual details about people smoking cigarettes. Queenie Eye, meanwhile, is derivative of some of McCartney’s peppiest Beatles tracks, namely Lady Madonna. And the closest McCartney comes to experimentation on New are on Appreciate and Looking at Her. The former is unwelcome experimentation, its industrial noise, misguided computerized funk and layered voices drowning out McCartney’s signature saccharine delivery.

The latter succeeds a little bit more, as McCartney takes clear influence from MGMT, a band he publicly loves, in creating a dancey, synth-laden chorus. But if you’re a hardcore MGMT fan, you’d rather hear the band itself than McCartney appropriating a style that MGMT hasn’t sported since 2008. In general, you want McCartney, the least experimental Beatle (yes, including Ringo), to stick to what he does best. And on New, he mostly obliges, making it one of his better recent efforts.