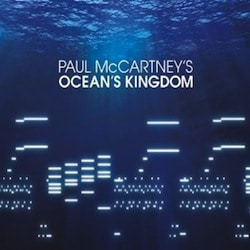 Is there anything you can say about Paul McCartney that hasn’t already been said? Almost 50 years after the first Beatles single, he’s long since transcended the status of a mere popular musician to become a living, breathing monument of Britain’s national heritage, his best loved work as much a part of our island’s collective identity as the royal family, Shakespeare’s plays or strawberries and cream at Wimbledon.

For the past two decades and more the Liverpudlian knight has shifted restlessly between different genres, dabbling in ambient electronica and opera as well as painting and poetry, usually greeted with little more than benign indifference by an audience that reveres him as one half of the greatest songwriting partnership ever, but who stopped taking him too seriously the moment they heard The Frog Chorus for the first time.

It’s therefore something of a surprise to see the amount of attention Ocean’s Kingdom, a new score commissioned by the New York City Ballet, has received, perhaps in part because some of the costumes for the production are designed by his own daughter Stella. Predictably, the reaction of the classical cognoscenti has been lukewarm. The thin plot tells the tale of an earthly princess’s doomed love affair with the prince of a rival underwater realm receiving the most scorn.

Yet in its author’s defence, there are plenty of immortal ballets and operas with less than brilliant librettos that have stood the test of time because of the quality of the music alone, and when listened to as an album rather than experienced on stage as part of a bigger production, Ocean’s Kingdom isn’t at all bad.

The first of four movements, also entitled Ocean’s Kingdom, starts off with rippling, grandiose strings and fluttering flutes that effectively depict a subterranean world. Stately and shimmering, the influence of Ravel in particular is obvious, but it’s skilfully done, if a little repetitive.

The second movement, Hall Of Dance, is more stirring and epic, with hints of the great Russian nationalist composers such as Tchaikovsky and Borodin. Some of the melodies are delightfully pretty, although nothing really lodges permanently in the brain (a flaw that manifests itself throughout the entire score). Then it’s on to the moody and portentous third section, Imprisonment, reflecting the capture of the key protagonists, before the kitchen sink comes out for the final flourish, which evokes the spirit ofAaron Copland with a dynamic if derivative conclusion featuring the orchestra at full throttle.

Aided by conductor and arranger John Wilson, who coaxes a first-rate performance from the London Classical Orchestra, Ocean’s Kingdom is an accomplished if unremarkable foray into an unfamiliar medium by the ex-Fab Four polymath, who should be given credit for rising to the challenge and emerging with his reputation intact. Even as he approaches 70, there are still occasional flickers of the tuneful genius that made McCartney a legend, but projects like Ocean’s Kingdom are the musical equivalent of Pele trying his hand at rugby, or Laurence Olivier having a crack at standup comedy. It’s hard to believe this is the same man who gave us Eleanor Rigby and Penny Lane nearly half a century ago, but to be fair to Macca, he’s frankly earned the right to do whatever the hell he wants.