Paul Simon – In The Blue Light 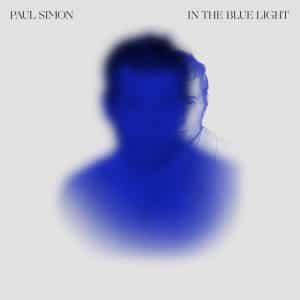 As the man himself once said, every generation throws a hero up the pop charts. Paul Simon has been, for nearly 50 years, one of our more unlikely but enduring pop stars – his career has taken in iconic folk songs with Art Garfunkel, enormously successful MOR pop in the ’70s, disastrous diversions into both film (One Trick Pony) and stage (The Capeman) and, of course, a career resurrection when he introduced African music to the West with the Graceland album.

Yet all good things must come to an end, and 76 year old Simon, although still in good health, has decided to gently wind his career down. This year saw a mammoth worldwide tour, which is to be his last one, and In The Blue Light sees him revisit some of his more overlooked songs and re-record them – as if he’s making a few final tweaks to his legacy before fully retiring.

So it’s not a new album, nor a greatest hits compilation – it’s an approach people like Kate Bush and Peter Gabriel have taken with various degrees of success, but the songs that Simon has chosen to revive give In The Blue Light a degree of freshness that more familiar tracks may not have provided.

The songs span from Simon’s third solo record, 1973’s There Goes Rhymin’ Simon and take in albums such as Rhythm Of The Saints, Hearts & Bones and So Beautiful So What. There are even four tracks from 2000’s You’re The One, not generally remembered as one of Simon’s more revered records. It’s an intriguing selection – no big hits and nothing at all from Graceland, which indicates that this is a record that’s very much being made on Simon’s own terms: the kind of thing you can do at the end of a massively successful career.

Simon’s voice, as anybody who saw him on his farewell tour will attest to, is still remarkably strong, and he’s rearranged these songs so that they suit his timbre. They’re relatively intimate arrangements, with names like The National‘s Bryce Dessner and jazz trumpeter Wynton Marsalis taking up unobtrusive guest spots.

So the Rhythm of The Saints cut, Can’t Run But, maintains its skittish energy but swaps the original’s Brazilian drums for Dessner’s woodwind and string arrangements, while the beautiful Rene And Georgette Magritte With Their Dog After The War (one of the highlights from the massively underrated Hearts And Bones album) is even more hushed and intimate than the original – just Simon’s voice and a shimmering string section, courtesy of the New York sextet chamber ensemble yMusic. The original is hard to beat, but this comes very close.

The earliest songs are an intriguing listen too – the opening One Man’s Ceiling Is Another Man’s Floor from his debut has a more jazzy tinge to it than previously (with Simon’s wife, Edie Brickell, helping out on finger clicks), and Some Folks Live Roll Easy sounds impossibly poignant 40 years on, with Simon giving a line like “here I am, Lord, knocking on your place of business / but I have no business here” an almost uneasy weight.

Curiously, given how prevalent they are, it’s the material from You’re The One which provides the album’s weaker points. They’re not among Simon’s stronger songs, nor are they given a sufficiently different makeover – with the exception of Pigs Sheep And Wolves which now has a raucous New Orleans jazz-style band added to it. Instead of The Teacher or Darling Lorraine, it would have been nice to see Simon look on some of the Simon & Garfunkel songs from his more elderly perspective, or even revisit one of the Songs From The Capeman.

Yet this is very much an album on Simon’s own terms, and it ends on the beautiful Question For The Angels. It isn’t radically different from the version on So Beautiful So What, but still makes for a fittingly reflective closer. Whether this is to be Paul Simon’s final studio album remains to be seen, but if so it’s a fine way to bring the curtain down on one of the most impressive canons in musical history.