Paul Simon – So Beautiful Or So What 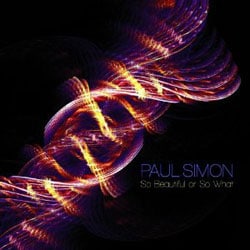 Some of the veteran legendary songwriters seem to have had their iconic status enhanced in their later years. Bob Dylan can seemingly do no wrong, even when it comes to bizarre Christmas albums and Neil Young is indulged all manner of diminishing returns in his songwriting.

By way of contrast, Paul Simon seems to have been somewhat neglected in recent years. Perhaps it’s a result of the massive commercial and critical failure of his Capeman project. Alternatively, it might simply be because Graceland was so omnipresent an album back in the mid-eighties that nothing can hope to replace it in the hearts and minds of Simon’s many admirers (although there’s certainly a case to be made that The Rhythm Of The Saints is at least its equal). Either way, new Paul Simon albums now arrive infrequently (this is his first in five years) and with little fanfare.

So Beautiful Or So What may not have been helped by a slightly bizarre campaign which saw it briefly available on Spotify a couple of months ago (but subsequently removed), with concurrent reviews in the monthly music press. A belated physical release may not be the best way of capturing Simon’s core audience. Perhaps the thinking is that the likes of Vampire Weekend, Dirty Projectors and Everything Everything, with their transparent African music influences, might help introduce Simon to a new generation. There can be little doubt that Simon deserves more attention and scrutiny – at his best, he can stand comfortably alongside the very best living songwriters.

That being said, Simon does not fare particularly well when he labours self-consciously at modernising his sound. His last album, Surprise, recorded with Brian Eno seemed to bury some good songs beneath a rather unhelpful and unnecessary sheen. Getting Ready For Christmas Day, the precursory single for this album, suggested Simon might still be moving in the wrong direction. Heavily processed acoustic guitars and other production tricks seem to divert attention away from the song, which is in itself a rather amiable, if lightweight, offering.

Elsewhere on So Beautiful Or So What, however, Simon reconnects with some of his core interests. There are hints at residual world music influences, with delicately propulsive tablas on Dazzling Blue, a brief flash of kora, or guitars that hint at the influence of Tinariwen, but they do not predominate. Instead, So Beautiful… stands as Simon’s most American album in some time, both in its sound and in its thematic concerns. There’s the reference to ‘flying down the highway’ on the bristling, exciting Love Is Eternal Sacred Light, the shooting of Dr King in the final verse of the title track or the gritty, bluesy guitar in Love And Blessings (one of the album’s genuine highlights in spite of its rather twee title). It is in this sense that So Beautiful… offers a fruitful way out of the Graceland trap – Simon retains the rhythmic interest and instrumental variety of his world music experiments, but manages to move forward by looking back a little.

Simon remains an inconsistent lyricist – brilliant and incisive when at his most compassionate and humane, a little forced and jarring when at his most introspective and self-absorbed. It is undoubtedly hard to be moved by The Afterlife’s chorus of ‘you’ve got to fill out a form first’, even as the cajun shuffle of the music remains hugely endearing. Then there are the occasional clunky lines that reach out for profundity but end up sounding rather uncomfortable (Dazzling Blue’s ‘the CAT scan reveals what the heart conceals’). On the other hand, the story of God’s ‘courtesy call’ to Earth that opens Love And Hard Times is vintage Simon, even if the song later becomes a little syrupy.

Although the songs here will always be found wanting when compared with Simon’s great allusive narratives, there is still plenty to enjoy. Best of all perhaps is Questions For The Angels, a delightfully tender ballad on which Simon sounds understated, relaxed and confident even when referencing Jay-Z – at his quirky, conversational best. The way he sings the word ‘destination’ even hints back at Homeward Bound – it’s difficult to know if this is intentional or not. Sometimes Simon suffers from a sort of elder statesman’s churlishness or cynicism (like a musical version of Grumpy Old Men), which is not entirely appealing, and some of the songs seem a little under-developed. There is, however, enough here to suggests that new Paul Simon albums should be bigger events.