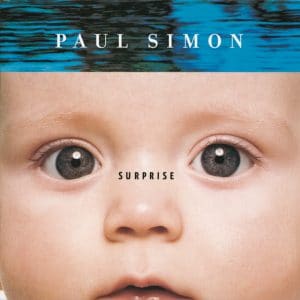 Forget the fawning over such young whipper-snappers as Alex Turner or Lily Allen, both of whom are barely out of their teenage years. This year has already seen the 58-year-old Donald Fagen slide effortlessly back into the spotlight with Morph The Cat, and just recently the 62-year-old Scott Walker scared us all silly with the extraordinary The Drift.

So it’s entirely fitting that one of the world’s greatest living songwriters has chosen now to make his comeback. Surprise is Paul Simon‘s first album in six years, and sees him team up with another elder statesman of music in Brian Eno (credited, rather pretentiously, as ‘sonic landscaper’ rather than mere producer).

The idea of the neurotic New Yorker teaming up with the laid-back Godfather of ambient music is an intriguing one, yet thankfully Eno’s presence isn’t too overbearing. Rather, he adds subtle touches to some of Simon’s best songs in years, whether it be a gently chiming guitar here or a swooping synth there. The bleeps and whoops of That’s Me or the fragmented sounds of Everything About It Is A Love Song are as avant-garde as it gets, but it’s a winning combination, resulting in Simon’s best work since Graceland back in 1986.

Lyrically, the man who marvelled at the optimistic country of America in the 1960s is now far more jaded. Since You’re The One was released in 2000 the world has witnessed both 9/11 and Hurricane Katrina, and Simon tries to make sense of both of the USA’s defining tragedies of the century so far with his usual expert eye.

This outlook on Bush’s America is reflected in the opening How Can You Live In The Northeast, an infectious number seemingly about the growing political divide in the US. Lines such as “How can you build on the banks of a river, when the flood water pours from the mouth?” make sure the spectre of New Orleans looms large.

Unsurprisingly for such an unapologetic liberal like Simon, the issue of Iraq is not far from his thoughts, as Wartime Prayers signifies. This isn’t a protest song however, rather it’s an expertedly written ballad about the uneasiness and tension of living in a post 9/11 America. “People hungry for the voice of God hear lunatics and liars” Simon sadly sings, before a gospel choir dramatically enters. It’s a heartbreakingly beautiful song.

It’s not all politics though – Everything About It Is A Love Song deals with his writer’s block (only Simon could get away with an opening line of “locked in a struggle for the right combination of words in a melody line”) while Outrageous is his funkiest moment since You Can Call Me Al, using self-deprecating humour about ageing to produce one of the stand-out tracks on the album. Even here though, amongst the funny lines about doing 500 sit ups a day and dying his hair the colour of mud, Simon still manages to have a pop at the self-interest of the Right (“It’s outrageous to line your pockets off the misery of the poor”).

Despite the anxiety and insecurities on display here though, it’s clear that Simon is a man who’s found redemption in the arms of his family. There’s the quiet contemplation of I Don’t Believe with children laughing and Simon’s love “brushing her long chestnut hair” and the rather icky tale of adopting children from all over the world in Beautiful. Most skilfully, there’s Father And Daughter, which could have been sickeningly sentimental in the wrong hands, but ends up here as rather touching.

There’s no African or South American experimentation on display here, just a return to what Paul Simon does best – wonderfully wordy, literate songs wedded to some of the most lovely melodies you’re likely to hear all year. It’s good to have him back, and good to know that, at 64, he can still produce albums of the most exceptional quality.