Paul Smith And The Imitations – Contradictions 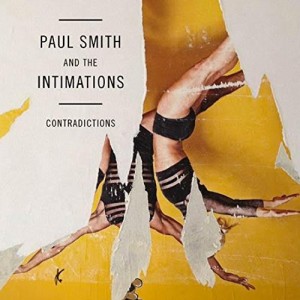 No need to panic – Paul Smith, the behatted, twirling dervish of a frontman, has not left Maxïmo Park. In fact, the Geordie indie-poppers are very much alive and well, and will be embarking on a UK tour this winter to celebrate the 10th anniversary of the release of their debut album A Certain Trigger. So, if you wish to pogo up and down, singing along to Going Missing or Apply Some Pressure while secretly weeping for a lost youth and your own creeping mortality, knock yourself out.

In the meantime, we have Contradictions, which is actually Smith’s third foray into some some sort of solo career. First, there was the lo-fi experiment of his 2010 album Margins, followed by last year’s collaboration with Field Music‘s Peter Brewis, Frozen By Sight. Now, he seems to have put an official band, The Imitations, together, even if the focus remains very much on Smith himself. And how could it not, when he’s in possession of that voice?

For Smith’s distinctive tenor is one of the most pleasing discoveries of the last decade. On more than one Maxïmo song he can send shivers down your spine: who can forget the way he batted down a former lover in the delivery of “run along…back to your new man” on Limassol? Smith sounds as good as ever on Contradictions, but there seems something missing – mostly, it’s the frenzy that his bandmates could create in his main group. This, by contrast, is very much a calmer, more thoughtful version of the old sound.

Which is fine, in effect – after all, there have been signs that Maxïmo Park have been suffering the law of dimishing returns for some time now. They’ve never really topped A Certain Trigger, and the number of stand-out tracks on each successive album has decreased with every release. So, you can’t really blame Smith for doing something slightly different. And when it works, it’s great: opening track The Deep End is bittersweet and gorgeously wistful, while Break Me Down is naggingly catchy, and contains a typically quirky Smith observation that “Kings Cross became that bit more glamorous”.

There’s also the excellent All The Things You’d Like To Be, which features the very welcome return of Wendy Smith, who people of a certain age will remember fondly from Prefab Sprout‘s heyday in the mid ’80s. Smith isn’t featured as prominently as she was with Paddy McAloon, but when she ghosts in to sigh “what would you like to be?”, she works perfectly in tandem with Smith. The awkward time signatures of Reintroducing The Red Kite is another highlight, reminiscent of Field Music’s best moments.

The only trouble is that the good tracks are matched by the nondescript filler. After about the halfway point, the constant mid-pace and subdued introspection becomes all too homogeneous. Songs like People On Sunday, Quick and Fluid Identity are all nice enough but still drift by without leaving much of an impression. Only the funky Coney Island (on which Smith sounds a deadringer for Orange Juice-era Edwyn Collins) and the beautifully reflective The Mezzanine Floor break the monotony.

It’s always a treat to hear Smith though, and if Contradictions doesn’t have the frenetic charm of his day job, there’s enough to keep the dedicated fan happy.