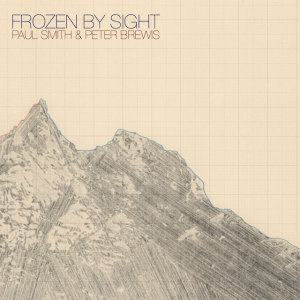 The album’s evolution can be traced back to last year’s Festival Of The North East, for which Smith and Brewis were commissioned to write and perform new music. That music was subsequently laid down at Field Music’s studio in Sunderland, with Peter’s brother David acting as co-producer.

With Peter Brewis abstaining from vocal duties, Smith’s voice is omnipresent on these 12 tracks. The music, however, skews much more towards the modern chamber pop of Field Music than Maxïmo Park’s peppy indie rock. Indeed, the album Frozen By Sight most closely resembles in the pair’s collective back catalogue is the self-titled album by The Week That Was, a 2008 side-project by Peter Brewis.

That said, Frozen By Sight is even more freeform than The Week That Was. The intention behind Frozen By Sight was, says Smith, to allow “the words to guide where the music was going in order to break free of more traditional pop structures”. Accordingly, the instrumentation – comprising double bass, piano, strings and percussion – tiptoes carefully around Smith’s words and is prepared to follow his every whim. As a consequence, it’s hard to differentiate between one track and the next; this was, quite possibly, its makers’ intention.

Across five Maxïmo Park albums, Smith has proven himself to be an adept chronicler of the highs and lows of relationships, often focusing on seemingly mundane details to illustrate a song’s overarching theme. He deploys a similar technique here, although this time the lyrics’ primary focus is places rather than people.

Frozen By Sight is a travelogue of sorts: each song refers to a particular location, brought to life through a succession of evocative images (such as the trees described as “upright fossils with fertile peaks” in the vaguely sinister Perth To Bunbury), curious characters (the “small man” who “sweeps water in a gutter” of LA Street Cleaner) and the minor epiphanies that will be familiar to intrepid travellers – for example, the sidestep taken by the narrator in Trevone that suddenly makes “the whole world [appear]”.

Frozen By Sight is a good record – one that’s exquisitely played and recorded. It’s also a little stiff: occasionally its arts festival origins become a little too obvious and one wishes it would cut loose a little more. But for fans of Maxïmo Park and (especially) Field Music, it’s well worth a punt.