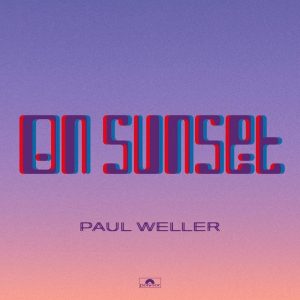 Paul Weller cuts a very contented figure these days, but that doesn’t mean his music making has become complacent. On Sunset, his sixth solo album in 10 years and his 15th in total, finds him not only ageing gracefully but continually renewing his musical explorations.

There was a time when the former Jam and Style Council front man would have used anger at current world affairs to fire his inspiration, but these days his songs barely allude to those events. Instead they are more personal and reflective, unafraid to appreciate the smaller things in life and the presence of those close to him. This is understandable given the relative domestic bliss in which he now lives, but it stops a long way from self indulgence. Instead the positive and appreciative lyrics are paired with music that is upward looking and ultimately extremely creative.

Walkin’ is a good example of his current state of mind, its ambling profile a study in contentment while its production is laced with birdsong. And yet it does not sound too twee, the pastoral elements complementing the familiar, slightly swarthy tones of the singer. The voice can be soulful, too, as the expressive tones of Baptiste illustrate.

Village is even more immediate. Underpinned by a sure footed bass line, it has gorgeous string arrangements, the fruits of another successful stint working with Hannah Peel. This is in keeping with previous album True Meanings, which enhanced Weller’s familiar band line-up with sensitive and effective orchestral colouring.

The arrangements make a big difference; for once again they are not layered on thick but subtly sculpted, capturing the rise and fall of each song where they are used. More is one such example, drawing back to its dubby bass line at the start of each verse but applying some gorgeous brushstrokes as the chorus arrives.

Weller continues to open his music up to others, too. Original Jam member Steve Brookes is in, while Slade violinist Jim Lea appears to enhance Equanimity’s easy gait. Earth Beat takes a track from Ghost Box’s Jim Jupp, reworking it through an almost bewildering set of styles heading towards Weller’s electronic experiments. It sprawls a little, but intrigues in equal measure.

On Sunset has three of the longest songs Weller has allowed onto an album, a sign of his continuing confidence to let the music breathe. None of them outstays their welcome, either. Mirror Ball begins the album, a mini-suite of mind-expanding sounds. In its central section it pans out, capturing the excited whoop of an audience in the moment their subject arrives on stage. In doing so it brings an unexpected, searing pang for the return of live music. The title track has pleasant contours in its reflections that would grace a George Harrison album, with dappled orchestral colouring charting Weller’s reminiscences. More is allowed an extended coda, where the rasp of a baritone saxophone underpins a brass section and The Strypes‘ Josh McClorey delivers a penetrating guitar solo.

Even as this album is released Weller is writing more songs, his next solo chapter already coming into view. It is an indication of the speed of his thought these days, and is shown in On Sunset’s ability to translate instinctive musical ideas into an album at a moment’s notice. Weller has found an ideal blend of experience and a quest for more that provides for an optimistic album for an English summer.