Pavement – Quarantine The Past: The Best Of Pavement 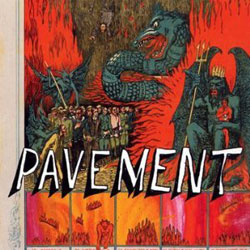 In an era touting Seattle grunge, west coast punk and ska revivals, and the unseemly rebirth of shock rock and emo, it’s hard to believe much else was happening in rock music in the early to mid ’90s. Each movement had a mascot that launched a thousand bands – Nirvana, Green Day, Sublime, Marilyn Manson – but who was holding the torch for good old indie rock?

In 1992, Pixies were wrapping up and Nirvana was taking over. But while Cobain and company were delivering a huge, Led Zeppelin type of sound to their studio recordings, Stephen Malkmus and Pavement continued a lo-fi tradition that spat in the face of technology. To track a very clear path of shared ancestry among these groups, compare, for example, the main guitar riffs in Pavement’s Debris Slide (released April 1991 on the Perfect Sound Forever EP), Pixies’ U-Mass (released September 1991 on Trompe le Monde), and Nirvana’s Smells Like Teen Spirit (also released September 1991 on Nevermind).

Rather than tritely looking at this as a case of plagiarism, consider the shared roots the bands must have had in listening habits, and also consider the elements that separate these songs. Pavement deal in mock sloppy lead guitar riffs and layer guitars that form an unsynchronised, distorted wall of noise. Pixies use an irresistible groove with layered guitars that work in union without sacrificing noise. Nirvana show off riffs with metronomic precision that combine in a way that is aesthetically beautiful while still being visceral. All of this is to say that if Nirvana is grunge gone mainstream, Pavement certainly picked up where Pixies left off in terms of producing noise outside of the popular realm.

Indie rock is certainly a loaded term now, but retrospectively it seems to be the only appropriate term for Pavement – “lo-fi” is at once too simplistic and too derogatory. The band’s recent return inspired this “best of” compilation, which is released in conjunction with their world tour – they’ve scheduled four gigs at London’s Brixton Academy in May, followed by an appearance at All Tomorrow’s Parties. These songs, ranging in selection from the band’s first EP, 1989’s Slay Tracks 1933-1969, all the way through their final studio album, 1999’s Terror Twilight, present the band’s essential elements.

Any compilation will necessarily upset certain fans, but completists will already have these songs, and those being newly introduced will be able to hear the competent, Television-like guitar interactions on Gold Soundz and Embassy Row; Malkmus’s lazily delivered witticisms on Stereo – “Well focus on the quasar in the mist, the kaiser has a cyst, and I’m a blank want list the qualms you have and if they stick, they will drown you in a crick in the neck of a woods…”; and the unmitigated buzzes and squawks of noise on Mellow Jazz Docent.

Though they weren’t really commercially successful during their ’90s run, Pavement, like Velvet Underground before them, have already found a wave of music enthusiast supporters who will keep their legacy alive after the fact. They’ve also inspired a whole new generation of indie bands, both directly, as when Malkmus collaborated with Silver Jews (Pavement’s Heaven Is A Truck could easily be mistaken for a Jews song), and indirectly, in the raw sounds of Neutral Milk Hotel‘s In The Aeroplane Over The Sea and in the hyperliterate (read: erudite) quirk of the 2000s – Sufjan Stevens and The Decemberists. In short, Pavement’s influence will continue to be felt for years to come, and this compilation admirably explains why.

More on Pavement
Pavement – Quarantine The Past: The Best Of Pavement
Spotlight: Pavement – long live the underground