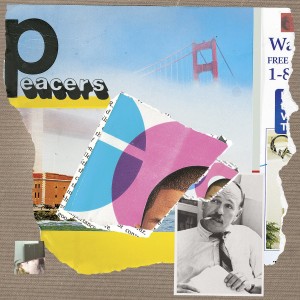 In the intertwining, weird and wonderful word of San Francisco rock, Mike Donovan is one of the area’s more esteemed luminaries. First with his band, the much missed and sorely underappreciated Sic Alps, as well as his own record labels and work as a member of at least seven other bands, Donovan has cultivated a singular path through the terrain of off kilter guitar rock, culminating in his solo debut, 2013’s weirded-out, acoustic leaning Wot. Peacers is the prolific Donovan’s new project and the self-titled debut highlights the guitarist and singer’s ever more lucid and oblique rock stylings.

Peacers is a record focused on vibes and slightly unsettling, insidious grooves. A spaced out, slightly out there feeling permeates songs, like the beguiling mantra-ish opener At The Milkshake Hop, or the squalling feedback of the sprawling Syd Barret like psych reverie of Mary Jane/Glorious Sunrise.

The increasingly experimental nature of Donovan’s work is present here as Peacers indulge in whimsical psych rock fantasies, like the languid to the point of being almost comatose Leicester Bride. Part of the charm of Peacers lies in the sound of the album. Peacers certainly make ostensibly rock music but it’s rock music with a softness and lightness to it. Nothing here is overpowering or overwrought. At times, this is a negative as Donovan’s flights of musical fancy flicker like moths drawn to light before fluttering away harmlessly; however, mostly it gives Peacers a warm sound that is welcoming and supremely satisfying.

Befitting of a serial collaborator like Mike Donovan, Peacers is not just a solo project. The album was produced by fellow San Francisco musician and arguably the busiest man in rock Ty Segall. As well as production, Segall also recorded most of the rhythm tracks, which are deft and unobtrusive. Segall is a man who perfectly understands idiosyncratic rock and provides a fine foil to Donovan’s creative spirit.

While Peacers can be hard to get a handle on, in its most straightforward moments there is a pleasing classic rock sound to the more upbeat tracks. R.J.D (Salem) rattles along on a gentle swinging garage groove while Laze It is a pristine piece of power pop. As the album progresses, things get a little more expansive, culminating in the guitar soloing of the wonderful Blume. Peacers’ rock sound is steeped in the late ’60s/early ’70s, but it certainly doesn’t sound like witless revivalism. Instead, it’s a refreshing change to hear a band that sounds like it could be effortlessly at home on The Old Grey Whistle Test.

Peacers’ music is a product of outsiderdom and the curious enclave of like-minded musicians in San Francisco who have forged their own path through the more interesting and diverting avenues of garage rock. It’s a promising debut from a musician spreading his wings and continuing to create his own little subculture, one informed by the past but brightening up the future.