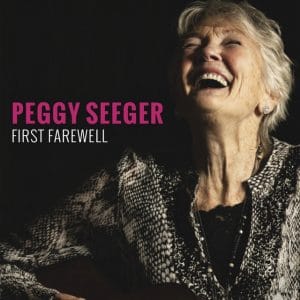 The term ‘folk royalty’ could have been invented for Peggy Seeger. Brought up in the US as the daughter of the noted musicologist/folklorist Charles Seeger and avant-garde composer Ruth Crawford, visitors to her childhood home included the likes of Woody Guthrie and Leadbelly. Peggy’s siblings Mike and Pete Seeger went on to become acclaimed folk musicians.

She herself has a back catalogue dating back nearly seven decades, including the highly influential Folkways series albums recorded with her long-term partner Ewan MacColl, who Peggy met after moving to the UK in the late 1950s. This relocation was prompted by the US government’s decision to withdraw her passport after she visited communist China, an early example of the fierce independence of thought she has shown throughout her long life. A noted women’s rights activist, songs like I’m Gonna Be An Engineer played an important role in the feminist movement of the 1970s.

At 85, she could be forgiven for having put her feet up years ago, but Peggy still sounds remarkably spry on new album First Farewell. Written and recorded entirely with her immediate family members – sons Calum MacColl and Neill MacColl and daughter-in-law Kate St John (of briefly successful ’80s alt-pop band Dream Academy) – it’s described slightly mischievously by the octogenarian as ‘probably’ her final album. She may be at the very end of her career, but Peggy’s effortlessly pure, flowing voice still sounds vigorous, and the song lyrics demonstrate that this is someone who still has plenty to say about the world around her.

First Farewell hits its stride from the start with opening track Dandelion And Clover, a beautifully arranged chamber folk gem that’s a wistfully sad elegy to a child’s death, built around Peggy’s elegant piano playing. No longer able to play guitar and banjo easily these days due to arthritis, the skills she developed early in her life as a classically trained pianist are finally brought to the fore, alongside tactfully deployed woodwind and strings.

One of the central themes of First Farewell is perceptions of ageing, and album highlight The Invisible Woman is a genuinely thought provoking examination of how older women are marginalised and ignored by society. With lyrics like “I can’t recall when it first happened… when my tangible self/was put on the shelf”, Peggy expertly encapsulates the imperceptible shift in a woman’s life when she is no longer noticed. Elsewhere, All In The Mind – a duet with son Calum – reflects on the fragmentation of identity that comes with dementia, while album closer, the bluegrass-indebted Gotta Be Home By Midnight, takes a slightly more irreverent, jaunty tone, with Peggy’s Prince Charming looking into her blue eyes “he said were the colour of time.”

Not everything on Final Farewell hits the mark – notably the partly spoken word We Are Here, a commentary on the impact of social media, which feels both glib and uncharacteristically unsubtle – and at just 31 minutes, it certainly doesn’t overstay its welcome. Overall though, this is a rich, warm, sometimes quite moving record which proves Peggy Seeger’s (and Dylan Thomas’s) point that old age does not have to mean going gently into that good night.