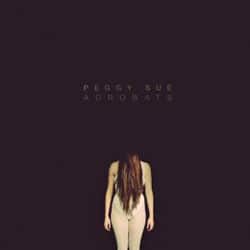 Peggy Sue’s debut album, 2010’s Fossils And Other Phantoms, was pleasant enough. Small, tangled narratives set against a brooding folk, its chief misfortune was in emerging during The Year of Mumford, where anything vaguely acoustic that didn’t evoke a waistcoated hoedown at a country house was deemed to be unclean, trampled underfoot by a seemingly endless chorus of Awake My Soul.

The year since has darkened them somewhat, the shadows lengthening and the smiles turned to creases. Out are the ukuleles, the accordion and the occasional playful humour that punctuated tracks like The Ballad Of Superman, supplanted by a propensity for growling riffs and minor keys. “There’s trouble in my blood, there always was, there always was,” runs the album’s closing refrain, and sure, Peggy Sue have long evoked a sense of the gathering storm, the sky streaked purple and the winds whipping up dust. But with Acrobats the clouds have broken, and what little light is left has to be squinted at to be seen.

It’s no surprise, then, to see John Parish’s name etched onto the liner notes. His work with PJ Harvey has overcast British music for over 15 years, and there’s a familiar caustic grind to opener Cut My Teeth, guitars downtuned and vocals veering from a splintered whisper to a tortured howl. It’s a provocative beginning, grungy and abrasive and not a little bit frightening, a clear divorce from the Sunday matinee sound that the three-piece once plied to an audience of pensioners on Bexhill seafront, before they sheared themselves of their …and the Pirates suffix. And like the album that follows, it’s not an easy listen.

Oh, there’s tunes, certainly, choruses and melodies that lurk beneath the surface waiting to latch on. All We’ll Keep has a drive and vigour that evokes Sonic Youth, whilst Song & Dance showcases the band’s much-developed musical prowess, riffs twining beneath drummer Olly Joyce’s formidable rhythms. It’s his contributions that make the greatest impression, the percussion innovative and alive, never content to simply recede into the background keeping time: Joyce’s efforts invigorate the album’s best tracks, leavening D.U.M.B.O.’s slight whine and lending Ruthie an experiment far beyond the song’s demands.

As for the girls, Katy Young and Rosa Slade make for versatile and interesting frontwomen, although their harmonies have homogenised a little beneath the distortion, with less of the warmth and the Regina Spektor tint this time around. But these are stronger songs than those that made up Fossils, and Acrobats is by far the more consistent album, secure in its identity and unwavering in focus.

Here, though, is its problem. Whilst no single track is weak, Acrobats grows tiresome some time before it ends, its tone too unwavering to hold attention throughout: a shame, because the final third is rather the best. There are good songs here, but they get lost within the dirge, the dust and the grime stirring up from the start, and never get the space to disperse. And there’s something a little harder to confront: that for all the development in their sound, this new Peggy Sue is less lovable than before, the whimsy and the wit, the colour and the life a little buried, and whatever their final lyrics say, a touch too troubled now.